Foster, who moves to Finance, and Hamilton, now in Health, viewed as potential successors to Robinson as First Minister 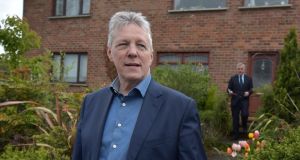 Northern Ireland’s First Minister, DUP leader Peter Robinson, has carried out a significant reshuffle of DUP ministerial posts in the North’s Executive, with Minister for Enterprise, Trade and Investment Arlene Foster taking over the Finance portfolio from Simon Hamilton.

Mr Hamilton moves to the Department of Health to fill the vacancy caused by the forced resignation of former minister Jim Wells, after he made remarks that linked gay parents to child abuse.

DUP junior minister Jonathan Bell, a South Belfast candidate in the recent Westminster election, was promoted to Minister for Enterprise, Trade and Investment.

Strangford MLA Michelle McIlveen has been appointed as the new DUP junior minister.

The extent of the reshuffle is likely to trigger renewed speculation about how long Mr Robinson intends to remain as DUP leader and First Minister, and about who might succeed him.

Mr Robinson (66) has refused to say when he might quit politics. In the coming months, he must consider whether he will lead the DUP into next May’s Assembly elections, or bow out to give a successor time to prepare for the elections.

He previously told The Irish Times: “We need to have a smooth transition within the party. It needs to be at a time when I feel that I have accomplished some of the key goals that I have set for myself. So, when that occurs, it will happen. It will not be according to the calendar.”

Current deputy leader Nigel Dodds, the MP for North Belfast, is considered one of the likeliest to replace him as party leader.

However, the DUP, under prompting from Mr Robinson, could opt to separate the positions of DUP leader and First Minister.

Ms Foster and Mr Hamilton defected from the Ulster Unionist Party (UUP) to the DUP in protest at former UUP leader and first minister David Trimble’s support for the 1998 Belfast Agreement.

Mr Robinson’s successor as First Minister would be expected to have served a period as finance minister, to have experience of managing the North’s budget.

Mr Hamilton served as finance minister from July 2013, and Ms Foster is now moving to the department.

Before holding the enterprise portfolio, Ms Foster was the North’s minister for the environment.

Mr Robinson said he had a “first class team” of ministers.

“This is a team that I am confident can take the party forward,” he said. “I think there are always horses for courses, so I wanted to get the right people in the right positions as we move forward. I believe I have done that.”