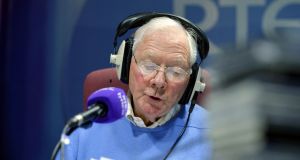 A lack of enforcement is one reason road deaths are up by 27 this year, chairman of the Road Safety Authority Gay Byrne said today. Photograph: Alan Betson / The Irish Times

Road Safety Authority (RSA) chairman Gay Byrne has described the increase by 28 in road deaths in 2013 as “worrying” and he said society has “dropped its guard”.

Figures on the number of people killed on the roads up to the end of the year show an increase for the first time since 2005 to 190.

A lack of Garda enforcement and resources was part of the reason road deaths were up, Mr Byrne said.

There was a “very significant perception” which had become “widespread” that Garda enforcement of traffic laws had decreased, he said.

It is “unfortunate” that progress made by Irish people in the past five years “appears to be unravelling before our very eyes,” Mr Byrne told RTÉ Radio in response to the figures.

In its end of year review of road crashes the Road Safety Authority raised “significant concern” about the number of motorcyclists who died last year, up almost 70 per cent on 2012 from 16 to 27. Most of the motorcyclists killed were men and over half were aged between 20 and 40, the report said .

The RSA notes a new trend in which almost as many motorcyclists were killed as pedestrians (30) . “Pedestrian fatalities have typically been significantly higher than motorcyclist fatalities to date,” the report says.

The number of drivers and passengers killed increased by a fifth on 2012 to 95 and 32 respectively, the report shows. The RSA said young drivers were the “most vulnerable”.

Of drivers killed most of them were male (80 per cent) and half of them were aged between 16 and 35.Over half of driver deaths were single-vehicle collisions.

There was also an increase in the number of road deaths where no seatbelt is worn, accounting for almost a fifth of cases, the report notes.

Gay Byrne said all agencies responsible for road safety must “push harder” to implement the road safety strategy. Mr Byrne said numbers in the Garda traffic corps was down from about 1,200 in 2010 to some 800. Gardaí are down motorbikes, patrol cars, equipment and “money left, right and centre” he said.

People start being “careless and complacent” once the perception gains that the likelihood “of encountering a yellow jacket around the next corner is remote”, he said. The figures highlighted the need “for all road users to be more vigilant,” he said.

The Government was “determined to reverse the increase in road casualties”, he said in a statement. Mr Varadkar was “confident” the new road safety measures being enacted in the Road Traffic Bill this year would “go some way towards improving road safety in 2014”.

Assistant Garda Commissioner John Twomey said the Garda would put in place a “comprehensive plan” for this year targeting the “main killer behaviours that consistently feature as factors in road trauma”.