Gardai are investigating the origins of the 'Hijra To Ireland' website as Irish Muslim leaders express concern about the "non-political body that has set a goal to bring as many Muslims to the state as possible". Video: Bryan O'Brien 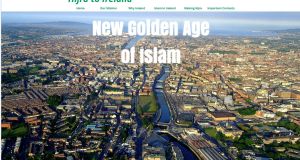 The Migrant Rights Council of Ireland (MRCI) is cited on the website hijra2ireland.com (screengrab above) as an organisation which will help illegal immigrants in Ireland.

An organisation which works with migrants has distanced itself from a website encouraging Muslims to move to Ireland.

The Migrant Rights Council of Ireland (MRCI) is cited on the website hijra2ireland.com as an organisation which will help illegal immigrants in Ireland.

The site, which has been denounced as a fake by Muslim organisations in Ireland, is scathing about Ireland’s immigration controls.

“Immigration authorities in Ireland are very strict, however enforcement throughout the State is lacking.

“For this reason, you can enter the country as a tourist, student or any other way and stay without much fear of being deported. Undocumented immigrants in Ireland are plentiful, and the economic system is able to sustain them,” it states.

“There are even organisations in Ireland that offer aid to undocumented immigrants and lobby for them on a national level (for a good example, visit www.mrci.ie). Ireland is truly one of the world’s most accommodating nations when it comes to immigrants.”

The telephone number for MRCI is included along with contacts for the Islamic Foundation for Ireland and the Islamic Cultural Centre of Ireland.

MRCI spokeswoman Aoife Murphy said the council was surprised to be included as a contact on the site, and nobody had contacted it about the matter.

The site, she said, gives “highly misleading and inaccurate information about Ireland’s immigration system. No one associated with the site has made contact with us thus far. While we can’t control the content of other sites, anyone who gets in touch with us will be given accurate and up-to-date information.”

The site’s home page shows an aerial picture of Dublin with the slogan “New Golden Age of Islam”, and advocates that Muslims relocate here to “thrive and create sprawling communities that fulfil the will of our prophet”.

It describes Hijra to Ireland (hijra is the Arabic term for migration) as a “non-political body that has set a goal to bring as many Muslims to the State as possible”.

It goes on to make a number of inaccurate statements about entitlements for immigrants, among them that the “State of Ireland grants immigrants who arrive to it access to . . . [health] services that normally don’t come free to the Irish citizen”.

The site points out that the Irish economy is undergoing a revival, so Muslim immigrants would have a good chance of getting jobs because “Irish youth have grown up expecting a certain lifestyle that doesn’t involve hard work and manual labour”.

“Because of this, Irish natives will be reluctant to work in jobs that require such work and pay a modest amount of money. These jobs provide an excellent entry point for immigrants.”

The website has been reported to the Garda by Dr Mudaffar Al-Tawash, the administrator of the Islamic Foundation of Ireland, whose name and telephone number are cited as contacts.

“It is fake... and it is not right,” he said. “We don’t know anything about it. The gardaí are trying to find out what happened.”

Dr Ali Selim of the Islamic Cultural Centre of Ireland suggested the site may have the opposite intention to what it purports to achieve.

“Does it mean to spread Islamophobia?” he asked. “Does it mean to warn people against the coming of Muslims to Ireland? Is it meant to impact negatively on the Syrian refugees?”

Shaykh Dr Umar Al-Qadri, the imam of the Al-Mustafa Islamic Centre in west Dublin, described the contents of the website as “deeply shocking” and designed to stir up hatred against Muslims.

Dr Al-Qadri, who is the chair of the Irish Muslim Peace and Integration Council, said the impression given by the website was that Muslims can move to Ireland and not have to integrate into Irish society.

“It is undermining the work that we do to show that Islam and Muslims are compatible with Western society,” he said.

The website domain is registered to “Benjamin Teun” who gives Amsterdam as his address.

However, the name has no internet trace, raising further suspicions about the legitimacy of the site. It could have been created in any country, including Ireland.