Right lot of Charlies turn out for Chaplin festival 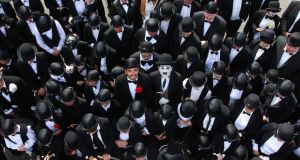 150 devotees kitted themselves out as Charlie Chaplin

Who’s a proper Charlie then? Well, 150 enthusiasts who kitted themselves out as Charlie Chaplin to try and break the world record for the greatest number of Chaplin lookalikes in one place at the festival held in his adopted home of Waterville in Co Kerry.

Leading the bowler hatted Charlies on their parade from the community centre to the statue of the comedian in the centre of Waterville was Chaplin’s grandson Arthur who lives in Clermont Ferrand in France but holidays regularly in Waterville with his mother, Josephine.

“This is my first year participating in the parade but I have attended every single festival since it started five years ago,” said Arthur. “The best thing about the festival is that it reveals people’s talents and that is something my grandfather would be very proud of.”

“It’s amazing for me. I have impersonated Chaplin for 16 years and I am alone in doing this, impersonating Chaplin at festivals all over the world, so it’s great not to be alone and have all these other Chaplins with me – it’s like they are supporting me,” he said.

According to the Guinness Book of World Records, the record for the most number of Chaplin lookalikes stands at 250 and although Waterville was 101 shy of that yesterday, the festival organisers were pleased with their effort and are already planning another attempt next year.

Charlie Chaplin Festival chairman Terry Dunne was upbeat: “We had to compete with Kerry in the All-Ireland semi-final in Croke Park but with 150 registered Chaplins we beat last year’s turnout of 134 so we’re heading in the right direction – we’ll beat it next year.”