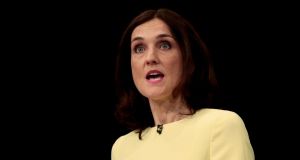 Northern Secretary Theresa Villiers has warned the survival of devolved government in Northern Ireland is at stake in the current talks aimed at resolving the key issues of paramilitarism and the deadlock over welfare reform. Photograph: Suzanne Plunkett/Reuters.

The survival of devolved government in Northern Ireland is at stake in the current talks aimed at resolving the key issues of paramilitarism and the deadlock over welfare reform, Northern Secretary Theresa Villiers has warned.

Ms Villiers opened up the possibility of a return to British direct rule if the current negotiations collapse when she addressed the Conservative party conference in Manchester on Wednesday.

The British and Irish governments and the North’s five main parties have been discussing welfare reform as part of the talks at Stormont House this week.

In her speech in Manchester, Ms Villiers laid emphasis on the deadlock over welfare which has resulted in the Northern Executive facing an impending shortfall of £600 million which could leave the Executive financially unsustainable well before the end of this year.

“Time is short,” said Ms Villiers. “Unlike last year, we simply don’t have the luxury of endless long hours of discussions stretching on and on until Christmas.”

“One only has to look round Europe to see the problems caused when an administration cannot live within its budget and the harsh impact that can have on some of the most vulnerable in society,” she said.

“Replaying that scenario in Northern Ireland would stretch political relationships within the Executive well beyond breaking point. There’s a real risk that those taking a hard line against welfare reform will end up running the devolved institutions into collapse as collateral damage.”

She said “a return to direct rule would be a severe setback” after everything that has been achieved over recent years and “we are doing all we can to prevent it”.

“What Northern Ireland needs is an effective devolved power-sharing government that is capable of making the kind of difficult choices on spending priorities, welfare and public sector efficiency with which more or less every other administration in the developed world has had to grapple in the years since the crash of 2008.”

Ms Villiers insisted the British government would not provide any money to cushion the effects of welfare cuts in the North. “The government will not fund a more generous welfare system in Northern Ireland than it does in the rest of the UK. There is no more money,” she said.

“Without welfare reform and efficiency measures to deal with in-year pressures, the Executive’s budget simply does not add up.”

She also repeated her warning that if the Northern politicians did not resolve the welfare issue she would return welfare powers back to Westminster.

Ms Villiers also referred to how the murders of Gerard Jock Davison in May and the revenge murder in August of Kevin McGuigan exacerbated the political crisis.

“In recent months the fallout from two brutal murders in Belfast has highlighted the continued presence of paramilitary organisations and the involvement of some of their members in criminality and organised crime,” she said.

“Let’s be clear. Paramilitary organisations have no place in a democratic society. They were never justified in the past. They are not justified today. And they should disband. So a key aim of the talks is to find a way to bring an end to this continuing blight on Northern Ireland society.

“These are very serious matters as is the continuing terrorist threat from dissident republican groupings who maintain both lethal intent and the capacity to mount lethal attacks.”

Ms Villiers told the conference it was too early to say whether the talks would succeed although she said she sensed a “genuine willingness on all sides to make progress”.

The Northern Secretary in her speech also had a swipe at the new British Labour leader Jeremy Corbyn and his shadow chancellor of the exchequer John McDonnell who last month apologised for his comments in 2003 that the IRA should be honoured for the bombings which brought the British government to the “negotiating table”.

“I have to say that many will view with grave concern the fact that, as recently as August, the leader the Labour Party have just elected was asked five times in an interview to condemn IRA terrorism and five times failed to do so,” said Ms Villiers.

“And while the shadow chancellor might have issued a carefully worded apology for the hurt caused by his comments on the IRA I say it’s time he retracted in full his call to honour IRA terrorists and admit that he was entirely wrong ever to have made that statement in the first place.”