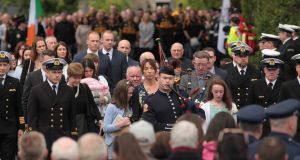 Rescue 116 crew member Ciarán Smith was a “drop-everything” kind of friend to whom “time and distance meant nothing”, hundreds of mourners heard at his memorial service in north Dublin on Saturday.

The 38-year-old Irish Coast Guard search-and-rescue winchman had received many awards for his courage, but his wife Martina, his three daughters and his family always came first, Ciarán’s close friend Sid Lawrence told the packed congregation at Our Lady Queen of Peace church, Oldtown.

His body and that of winch operator Paul Ormsby have not been recovered, despite extensive air, sea and shore searches.

Members of the Fitzpatrick, Duffy and Ormsby families joined Mr Smith’s relatives at the memorial service.

The Government was represented at the ceremony by Minister for Transport Shane Ross.

Fr Pat Reilly described the north Dublin airman as someone who lived his life to help others.

The priest also paid tribute to the many members of the search-and-rescue community present at the service.

Martina Smith and Ciarán’s three daughters, Caitlin, Shannon and Finlay, presented symbols of his life – his medals and a family photograph.

“In my lifetime, there will never be enough deeds I can do, and not enough words I can say, to express my gratitude for your help and support,” Martina Smith said in her tribute, in reference to all those who were involved in the search effort after the crash.

Ms Smith spoke of a man with a “warm smile”, “eyes that sparkled” and a “sturdy, strong handshake”, a man who was her “dearest and best friend” and the father of three “beautiful girls”.

“My dream was always pretty simple – to have a happy home, and boy, did I hit the jackpot,” she said.

“Ciarán Smith, you are responsible for the majority of lines and wrinkles on my face,”she said, adding that the majority of these were “laughter lines” as “you took me on a journey I had never explored alone, and I thank you for that”.

She said her husband had placed a “blanket” around his family and she appealed to him to “help me steer this ship, guide our girls and keep this family unit together”.

Mr Lawrence also paid tribute to all those involved in the search effort, including Blacksod lightkeeper Vincent Sweeney and his family, the Mullet peninsula community, the volunteers who provided food to search crews in Eachléim, the Irish Coast Guard, RNLI, the local fishing fleet, the Garda, the Civil Defence and the mountain rescue units.

A large contingent from Mourne Mountain Rescue Team joined members of the ambulance and fire services and the Order of Malta outside the church.

Mr Lawrence also thanked the Search and Rescue Dog Association, the Commissioners of Irish Lights and the crew of their ship Granuaile, and neighbours, friends and family from “all four corners of this island”.

The number of stories he had heard about his “professional, competent, loyal, true, selfless” friend were “overwhelming”, Mr Lawrence said.

He said the winchman had participated in “hundreds” of rescue missions with the Air Corps and Irish Coast Guard and received marine meritorious awards and military service medals from the State.

He said Ciarán had also raised €10,000 for charity during his Race Around Ireland cycle, and was an enthusiastic member of the local Wild Geese GAA club

Gospel readings at the service were by Ciarán’s sister Orla and his brother Sean, while his Irish Coast Guard colleague Ciarán Murphy read the words of Invictus by William Ernest Henley.

A guard of honour was formed at the church by the Irish Coast Guard and search-and-rescue personnel.

An Irish Coast Guard Sikorsky S-92 helicopter also circled overhead, dipped its nose and then flew slowly back to base.

A memorial service for Paul Ormsby is to be held in St Matthew’s church, Ballyfermot, Dublin, on June 10th.