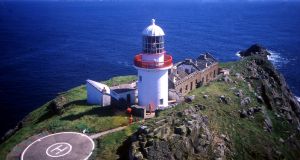 Blackrock lighthouse, Co Mayo: it is the last known position of the helicopter, some 13km west of the Mullet peninsula. Photograph: John Eagle

The Irish Coast Guard is hoping a narrow weather window at the weekend will allow it to continue efforts to retrieve the “black box” flight recorder from the helicopter that crashed off the north Mayo coast.

Pieces of wreckage have been found by the Air Accident Investigation Unit (AAIU) on Blackrock lighthouse, the last known position of the helicopter, some 13km west of the Mullet peninsula.

A faint signal from the helicopter’s black box recorder was picked up in 40m of water some 50 to 60m off the rocky outcrop on Wednesday.

However, a 5 to 6m swell around the lighthouse prevented efforts throughout Thursday to pinpoint the flight recorder location, in spite of several attempts to approach the rock and deploy hydrophone equipment from a small craft.

It is hoped another attempt will be made on Sunday, although the Irish Coast Guard and Naval Service are constantly reassessing conditions in the area.

The funeral of senior pilot Capt Dara Fitzpatrick, who died after the crash,will take place in Glencullen, Dublin, on Saturday, with cremation afterwards in Mount Jerome, Harold’s Cross.

The rescue agencies are still hoping the bodies of the three missing crew – co-pilot Capt Mark Duffy, winch operator Paul Ormsby and winchman Ciaran Smith – are with the wreckage of the aircraft and the flight recorder signal will lead them to the location, if it is still within the fuselage.

The AAIU team, assisted by British investigators, were flown by the Air Corps to the lighthouse on Thursday afternoon to inspect what was described as a particular “area of interest”.

The Irish Coast Guard said that the “pieces of wreckage” found could have been washed up in the swell around the rock.

All wreckage is being taken for further examination by the AAIU as part of the official inquiry.

The Irish Lights tender Granuaile is due in Blacksod Bay early on Friday morning to assist with the black box recovery.

The 80m ship has a dynamic positioning system, allowing it to remain on location in heavy swell, and is equipped with lifting gear and a diving platform.

The Naval Service divers, supported by the LÉ Eithne, plan to deploy a remote operated vehicle (ROV) to capture an image of the hazardous area before attempting any dives.

The team has air diving capability to 50m of water and is equipped with underwater search equipment, including an ROV, side scan sonar and magnetometer.

“If the ROV can give good images, we can move on to the next phase,”Cdr Brian Fitzgerald of the LÉ Eithne said.

“A shot line or weight line will be dropped,” he said, and divers would then plan their approach.

A 12m local angling boat, An Gearoidín, was deployed on Thursday morning to approach the rock with the specialised equipment, but Naval Service and Garda divers who escorted it in rigid inflatables deemed the heavy swell to be too hazardous.

Air, sea and shore searches continued on Thursday for the three missing crew and wreckage, and Garda Supt Tony Healy said families of the men were being kept fully briefed, with Garda and Irish Coast Guard support.

“Houses have been made available locally by the community and we are fully supportive of whatever decision the family make in that regard,” Supt Healy said.

The aircraft was preparing to land for a routine refuel at Blacksod lighthouse, after it had been despatched from Dublin to provide “top cover” or support for the Irish Coast Guard’s Sligo-based Sikorsky S-92 on a medical evacuation 240km off the west coast on Monday night.

The body of Capt Fitzpatrick (45), the mother of a three-year old son, Fionn, will repose at her home in Dublin on Friday.

She will be cremated in Mount Jerome, Harold’s Cross, after a funeral service at 11am on Saturday in St Patrick’s Church, Glencullen.