Report published on how to disband paramilitaries in North 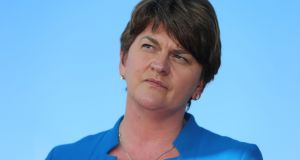 First Minister Arlene Foster said strategy would be devised on the panel’s recommendations.

The Irish and British governments have been advised to consider decommissioning measures as part of an effort to address paramilitarism in Northern Ireland.

A report by an independent panel, sought by the Stormont Executive after the murders last summer of Gerard “Jock” Davison and Kevin McGuigan, says “support for progress among some key figures in both republican and loyalist groups is notable”.

“We have encountered no desire among these groups to return to military campaigns but rather a clear understanding that any community concerns need to be resolved politically and criminality must be addressed,” it says.

The panel was formed as part of last November’s Fresh Start Agreement which came after a political crisis emerged following the murders Mr Davison and Mr McGuigan and a British government report drafted by the PSNI and MI5 found members of the IRA were involved in Mr McGuigan’s murder.

One of its proposals would involve the British and Irish governments devising a new disarmament mechanism for a limited period where “residual weapons” could be decommissioned.

“None of the groups we have met was prepared to use the word ‘disband’, even in a situation where their structures and activities had been transformed or withered away. We have therefore interpreted our brief as aiming to create conditions in which groups would transform, wither away, completely change and lose their significance,” they said.

First Minister Arlene Foster and Deputy First Minister Martin McGuinness said an “action plan and strategy” would be devised on the panel’s recommendations by the end of June.