Report finds whales and dolphins unable to breed due to pollutants 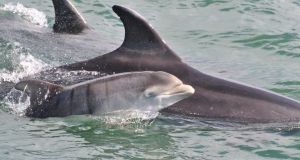 A dolphin and her newborn calf: a report has found that ottlenose dolphins, striped dolphins and killer whales or orcas are under enormous threat from persistent pollutants. Photograph: Isabel Baker/Shannon Dolphin and Wildlife Foundation

Man-made pollution is affecting the ability of marine mammals such as killer whales and dolphins to breed and may lead to the extinction of some species, according to new international research.

Bottlenose dolphins, striped dolphins and killer whales or orcas are under enormous threat from persistent pollutants such as toxic chemicals, the study involving 31 partners, including in Ireland, found. Some of these pollutants are no longer produced, but are still making their way into the marine environment from landfill leachate, the research published in Scientific Reports says.

The Irish Whale and Dolphin Group’s chief science officer, Dr Simon Berrow, described the findings as “quite shocking”, adding that he had not seen the calf of a killer whale in Irish waters since former taoiseach Charles Haughey declared a sanctuary for whales and dolphins 25 years ago.

He said the focus of environmentalists had switched from pollution to climate change, fishing and seismic surveys. “This study shows the threat pollution poses to our coastal species has not gone away and indeed is far greater than we expected.”

Data collected by the Irish Whale and Dolphin Group in Irish waters fed into the research led by Dr Paul Jepson, of the Zoological Society of London.

Biopsy samples taken from the Shannon estuary dolphins showed the lowest levels of contamination in Europe but they were still “well above the toxicity threshold”, Dr Berrow said. Samples from a killer whale stranded in Cork showed some of the highest concentrations recorded for this species in the study, he added.

Dr Berrow, who was one of the joint authors with Dr Sinead Murphy of Galway-Mayo Institute of Technology (GMIT), explained that pollutants identified in the study are banned substances still making their way into the marine environment.

Among them are organochlorines such as poly-chlorinated biphenyls (PCBs) used in electrical equipment from the 1920s. PCBs were banned in Britain in 1981 and in the rest of the EU from 1987.

However, excessive concentrations have been found in the blubber of more than 1,000 dolphins and killer whales over the past two decades, affecting both breeding ability and immune systems in particular “hotspots”, including Irish and British waters.

“When a mother is lactating, up to 90 per cent of her PCB body burden can be passed into the calf across the placenta and through the milk, leading to death of the calf,”Dr Berrow says.

“In highly contaminated populations it may take a number of calves to die prematurely, to lower the concentrations in the mother to levels where a new calf may be viable,”he says.

Less than 10 per cent of the total PCBs manufactured are estimated to have leaked into the marine environment, so Dr Berrow says it is “imperative we prevent more entering - through, for example, landfill leachate and the practice of re-suspension during dredging”.

If scientists studied concentrations of other contaminants, they could discover that “our dolphins and whales are swimming in a cocktail of persistent pollutants, having unknown but potentially catastrophic effects on them and other marine life”, Dr Berrow says.

PCB pollution continues to impact populations of orcas and other dolphins in European waters by Paul D Jepson is published by Scientific Reports at nature.com/articles/srep18573.