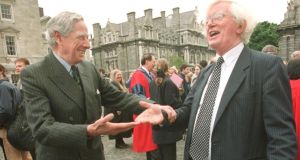 Considered within TCD as the highest accolade it can bestow, the seats of chancellors and pro-chancellors are traditionally the reserve of “the most distinguished graduates and academic members of staff who have made exceptional contributions to the college over the course of their career, or for illustrious members of the external community notable for their special contribution to society”.

In 2002, Dr O’Reilly received a papal honour from pope John Paul II in recognition of his “outstanding contribution” to the restoration of the Irish College in Paris.

Born in 1922, Dr O’Reilly was educated in St Gerard’s School, Bray, Ampleforth College, York, and TCD. He had been a member of the Turf Club since 1967 and was president of the Royal Dublin Society from 1986 to 1989. He received honorary doctorates from both TCD and the National University of Ireland.

He was married to Tess and father of Mary, Charles, Jane, Olivia, Margaret, Rose, Louise, Peter, Paul and Julia.

His removal takes place this evening to the Church of the Immaculate Conception, Eadestown. Funeral Mass follows tomorrow at 2pm.