Pictures from the funeral of Supreme Court judge Adrian Hardiman in Ranelagh, Dublin. Audio is a rendition of 'Sé An Tiarna M’aoire'/The Lord Is My Shepherd with singer Simon Morgan and organ by Vincent Lynch. 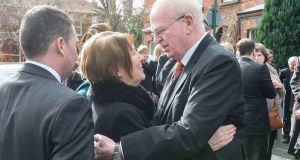 Adrian Hardiman was remembered at his funeral yesterday as a man with a brilliant mind and a restless, unquenchable appetite for knowledge; a polymath and patriot who loved debate but did not row; a loving husband and father who expressed adoration for a grandchild by simply staring at it as it slept, watching in silence, enraptured, for 20 minutes.

He was also, as Michael McDowell, his eulogist, pointed out, “mechanically challenged”.

“He was a person in whom you could never entrust any device, however simple, from a biro to a pen to anything more complex. It would always be broken within minutes,” said the barrister, former attorney general and former leader of the Progressive Democrats, a life-long friend since their first teenage debating encounter.

The renowned late Supreme Court judge was so hopeless with objects that he once broke a glass in his mouth, apparently unintentionally. He would fiddle with his watch while talking, frequently breaking the strap.

“Throughout his life,” said Mr McDowell, “he battled with unseen forces that daily conspired against him. They lost his car keys, his mobile phone, his reading glasses, his cameras, his passports, his shoes, his socks and his suits. On all of these occasions, he tackled his adversity by intercessional prayer to his loving wife, Yvonne. She was the only circuit judge that I know of whose sessions were interrupted to take a phone call to find out where the car keys were.”

These vignettes of levity could not, however, dull the depth of talent, spanning diverse disciplines, that emerged at the funeral of a man whose standing among his peers and in the community generally was evidenced by the huge attendance at the funeral service in the Church of the Holy Name in Ranelagh, Dublin.

The judiciary was represented by the Chief Justice, Susan Denham, whose presence was supported by three of her predecessors, Tom Finlay, Ronan Keane and John Murray. Numerous other former judges as well as serving members of the bench, from the Supreme Court to the High Court, Court of Appeal and Circuit Court, were also present, as were dozens of barristers and solicitors.

There were well-known figures also from the worlds of politics, diplomacy, academe and the media – an eclectic collection of more than 1,000 people who filled to capacity the stucco-wall church interior with its polished pink Galway granite pillars marching down either side of the nave.

All were welcome, said the celebrant, Fr Myles O’Reilly, noting the great throng which he said was “united in fellowship” and there “out of respect, and appreciation for, and love of Adrian Hardiman who was so suddenly taken from us”.

He added: “We have come to thank God for his rich and varied life and to acknowledge that he was a blessing to his country and to his family.”

Mr Hardiman’s remains, in a simple oak coffin with wooden handles, and with a spray of white lilies, white chrysanthemums and greenery, were brought into the church to the strains of Abide With Me which was followed by the opening hymn, How Great Thou Art.

Baritone Simon Morgan, accompanied on organ by Vincent Lynch, sang Sé an Tiarna m’Aoire (Psalm 23; The Lord is My Shepherd) and Ag Críost an Síol (Christ is the Seed), and led the congregation in the recessional hymn, Be Still My Soul.

The chief mourners were Mr Hardiman’s widow, Ms Murphy, their sons Daniel, Eoin and Hugh, and his brother, Fergal.

In his homily, Fr O’Reilly noted that Hardiman had “a voracious appetite for knowledge, an unrestricted desire to know. He never stopped learning, always curious”. His mind was never inactive, even when it appeared otherwise.

“On one of his holidays in Donegal,” said Fr O’Reilly, “the family were packing up to leave and Mary Jones, one of the family friends, gave a gentle hint that he could be helping with the tidying up! He said ‘I am busy’ as he continued to sit in the chair. ‘Busy about what?’ she asked rhetorically. ‘I am thinking,’ he said emphatically.”

The priest said that intellectuals such as Hardiman who sought God through their minds faced the danger of falling in love with their view of reality and not reality itself. “Intellectuals need mystical experiences to take them out of the prison of their minds,” he suggested.

In a eulogy that skirted the edges of his emotions, Michael McDowell said his best friend had multiple achievements.

“The fates have robbed us of someone who, uniquely in his generation, simultaneously excelled in his many different personae – as a husband, as a father, as a grandfather, brother, an original thinker, an historian, an author, an advocate, a jurist, a judge, a public speaker – and there are so many that are here this morning – simply that of a loyal friend,” he said.

Hardiman had been a fearless barrister, “almost always was briefed for the small man and by the small firm” who in private “was in many respects, quiet, unassuming and shy”.

He continued: “As a judge, Adrian was unique. Others will in the fullness of time study and publish commentaries on his judgments in the Supreme Court. Suffice it to say this morning that they reflected his vision of the Constitution as a Hobbesian contract between the individual and the State and his overriding concern that the State should be the servant, rather than the master, of the people . . . Maybe it is just as well that our Supreme Court and judiciary spans a full spectrum of those whose priority is to make the system work, to those, like Adrian, whose priority was to make sure the system does not always ground down the individual.”

Hardiman’s love of debating, of history and travel, of literature (a volume by him on Joyce, Ulysses and the law is with a London publisher) was matched by a love of convivial and stimulating company.

“To his table came historians, poets, authors, painters, politicians, diplomats, media commentators and a huge coterie of legal and non-legal friends to whom he was always so loyal and so generous,” said Mr McDowell, noting how the Hardiman’s enriched the lives of others.

“I find it hard to convey in words the fun and the sparkle which they brought to the lives of their friends.”

Hardiman the patriot was evident in his regard for the Constitution.

“He viewed article 8 of our Constitution – which states that fidelity to the nation and loyalty to the State are the fundamental duty of all citizens – he viewed that very seriously. He was a man who was wholly devoted to the Irish State and to its success. . .

“He crossed swords with many people on many issues but he never, ever, took any forceful advocacy to the point of personal animosity. He was indeed a remarkable man,” said Mr McDowell.