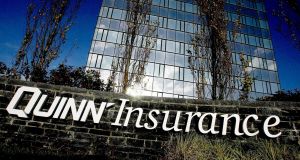 Dissident republicans and criminal groups have been blamed for a spate of recent incidents at the former Quinn Group on the Fermanagh-Cavan border.

The incidents relate, primarily, to Quinn Industrial Holdings Limited in Derrylin, Co Fermanagh, the company that bought back parts of the business once owned by discharged bankrupt businessman Sean Quinn.

A major cross-Border investigation between the PSNI and the Garda has begun following an escalation of hostility, including death threats, intimidation, sabotage and reports of a worker being threatened with a gun.

Last week a handwritten message, accompanied by three bullets similar to those used in an AK47, was left at the company while a lorry was sabotaged, causing £12,000 (€15,200) worth of damage.

Ulster Unionist MP Tom Elliott claimed the incidents, which have increased in recent weeks, are being led by people with links to both dissident republican and criminal groups.

“Such individual or group actions must be rejected by society and dealt with by the authorities,” said Mr Elliott.

“The type of criminality, attacks and intimidation that we have been hearing about is totally unacceptable. The businesses within the former Quinn Group provide significant employment within the area on both sides of the Irish border, which is very welcome within our society.”