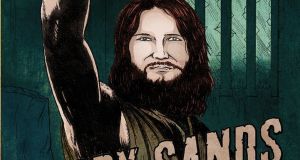 A new graphic novel ‘Bobby Sands Freedom Fighter’ has been accused of ‘sending out a message that somehow terrorism is appropriate’. 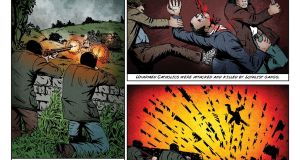 Book publisher Michael O’Brien has rejected unionist criticism of a new graphic novel, Bobby Sands Freedom Fighter, which was launched on Monday and is written and illustrated by Gerry Hunt.

Mr Elliott who is MP for Fermanagh South Tyrone, the constituency which Mr Sands was elected to while he was on hunger strike in 1981, said he is to raise the issue of Arts Council funding for the book with the council and with the Department of Culture Arts and Learning run by Sinn Fein Minister Caral Ni Chuilin.

“Because it is a comic book it is directed at young people. It is wrong to be sending out a message that somehow terrorism is appropriate. That is just not right,” he said.

Mr Elliott said that the book, which also features an epilogue by Sinn Féin president Gerry Adams, provided a misrepresentation of Mr Sands, who was the first of ten republican prisoners to die on the 1981 hunger strike.

“He was not a freedom fighter. He was a terrorist who belonged to an organisation that murdered fellow Irish citizens,” he added.

“How the Arts Council ever came to fund this project I have no ideas. I will be putting in some questions about what were the criteria for funding to the department and to the council,” said Mr Elliott.

A spokesman for the Northern Arts Council said that a total of £12,488 was awarded to O’Brien Press to assist their work as a publisher with £5,116 to support the book.

“The Bobby Sands book, a full colour graphic novel by Gerry Hunt, is by an author and illustrator who has a significant track record in the genre of graphic novels and has written other historical graphic novels,” he said.

The O’Brien Press funding application was “strong” and satisfied all the arts criteria, he added. “We do not interfere with editorial content nor do we draw a line regarding content chosen by publishers which may attract controversy,” he said.

Publisher Mr O’Brien said the reaction had taken him by surprise and he regretted that the book had become “highly politicised”.

He said the “graphic novel” form generally was aimed at adults and was acclaimed all over the world although not so familiar with Irish readers. “To trivialise this work I think is just out of ignorance with the form,” he said.

He said that O’Brien Press had also published a children’s book on the Siege of Derry, which would have been from a unionist perspective.

“We are not propagandist. We are not campaigning for anybody and I am not in any political party. We are not doctrinaire,” added Mr O’Brien.

He said Mr Hunt’s father fought in the GPO in 1916 and that he has written other graphic novels for O’Brien Press including books on Jim Larkin and the Lockout and on the Easter Rising.

Mr O’Brien said he asked Mr Adams to write an epilogue about Mr Sands “because I wanted to see from his point of view what Bobby Sands’s legacy is”.

Reacting to Mr Elliott’s description of Mr Sands as a terrorist, Mr O’Brien said, “You could also call the men of 1916 terrorists. I would say when all peaceful protests have failed and there is grave injustice sometimes people are left with no alternative except violence.”