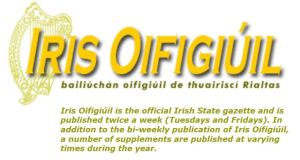 The practice of publishing the names and full addresses of new Irish citizens in the State’s official gazette, which drew controversy last year, has been put on hold pending a review.

Immigrant rights advocates expressed concern when it emerged in August that this personal information had been published in Iris Oifigiúil and was searchable online.

The status of all newly naturalised citizens as either adults or minors was also published in the gazette.

A woman who discovered her details online and was concerned this breached her right to privacy and posed a threat to her safety contacted The Irish Times last August.

She said she had never been informed when she applied for citizenship that her details would be published.

The practice of publishing the names had ceased for a time after previous complaints by other citizens concerned about the availability of their details.

Following a review in 2011, the Department of Justice decided to begin publishing the names again and it maintained there was a legal requirement under 1956 legislation to do so.

Details of citizens naturalised in 2012, 2013 and 2014 passed to the Office of Public Works, which publishes Iris Oifigiúil.

The records also show Minister for Justice Frances Fitzgerald told officials in an email just days after the practice was reported in The Irish Times that she wanted it reviewed.

A notice to inform applicants for citizenship that their details would be published was placed on the department’s website only after the concerns were raised last year.

A complaint from one individual remains with the Data Protection Commissioner.

In a statement, the department said some 93,500 individuals had become naturalised Irish citizens since 2011.

But it said the publication of names in relation to the recent citizenship ceremonies had been “put on hold pending the outcome of a review of the legal requirement to publish the details”.

“ It is, after all, granting something very valuable at the Minister’s absolute discretion and the exercise of that discretion should be fully transparent,” it added.

Arrangements were in place informing those being naturalised of the requirement to publish those details.

The department said the manner in which Iris Oifigiúil was circulated was not a matter for it.

But it understood that in future the citizens’ details would be listed in a separate schedule that would no longer be included in the online version.

In addition, the Office of Public Works had taken a technical measure to ensure the already published lists were no longer searchable.

It said these measures would provide “greater protection in respect of applicants’ details”.