PSNI to investigate role of ‘Stakeknife’ in 40 IRA murders 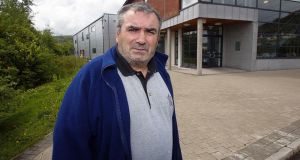 Freddie Scappaticci: fled Northern Ireland for Britain in 2003, where he is today said to be still living. Photograph: Pacemaker

Claims that a senior British army agent in Northern Ireland was linked to 40 murders while he was head of the IRA’s punishment unit are to be investigated by the North’s Director of Public Prosecutions.

Freddie Scappaticci fled Northern Ireland for Britain in 2003, where he is today said to be still living, after he was “outed” as a British agent known as “Stakeknife”, although he has always denied the charge.

Director of Public Prosecutions Barra McGrory has asked the PSNI to investigate claims of alleged collusion by the security forces in 24 murders linked to him.

Speaking yesterday, Mr McGrory said: “I have been made aware of the scope and range of possible offences that may have been carried out by this individual and also members of intelligence agencies.

“This information has been provided to me by the office of the Police Ombudsman, Dr Michael Maguire, which is now concluding a painstaking review of all available material.”

Known as “The Nutting Squad”, the IRA’s punishment unit had a fearsome reputation within the terrorist group, torturing its victims often for days, usually in abandoned buildings in the Republic, before killing them.

The DPP has ordered two inquiries. The first, which began in August, will examine potential acts of collusion and criminal activity by security services and MI5 officers.

“While ultimately the IRA have carried the culpability for killing these people, many of the families think, equally, if not more so, that senior people in government and the intelligence services sanctioned those murders and allowed them to go forward,” said Mark Thompson of Relatives For Justice.

Shauna Moreland, whose mother Caroline was abducted and shot dead by the IRA in July 1994, said: “It is a step forward in the right direction but I have reservations about it. I want justice for my mother. I want the truth. We need an independent international investigation to get it.”

Kevin Winters, the solicitor representing a number of relatives of victims who were murdered by the IRA squad, called for a statutory inquiry into the role of the British agent.