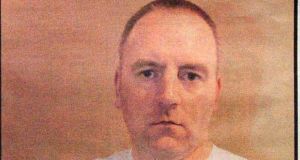 Gerard ‘Jock’ Davison was viewed as an assertive figure in the area and would not have been universally popular. Photograph: Daily Ireland

The PSNI has ruled out dissident involvement or a sectarian motive for the murder of former IRA commander Gerard Davison (47) who was shot on Tuesday morning in the Markets close to Belfast city centre.

Police are trying to establish a motive for the killing of Davison who 10 years ago was questioned about the murder outside Magennis’s Bar of 33-year-old Robert McCartney.

Davison, a community worker, was shot dead at about 9am on Welsh Street in the Markets as he was walking to work at the local community centre. The area was busy with children going to school and people on their way to work.

“This was a cold-blooded murder carried out in broad daylight in a residential area and it has no place in the new Northern Ireland, ” said Det Chief Insp Justyn Galloway who is heading the investigation.

“I do not believe it is sectarian. And I do not believe dissident republicans have been involved,” he told reporters. There was widespread political condemnation of the murder.

There was also some local and political acknowledgment that Davison was viewed as an assertive figure in the area and would not have been universally popular. One source queried if he had run “foul of drugs interests” that he had confronted.