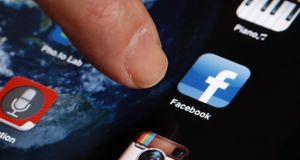 The ‘real-name’ policy has been opposed in the US and elsewhere. Photograph: Thomas Coex/AFP/Getty Images

Facebook users who choose to use their Irish language names on the social networking site are to hold a protest next month at the company’s Dublin headquarters over its contentious user identification policy.

The so-called ‘real-name’ policy requires users to prove their identity using either one form of official Government identification such as a birth certificate, a driver’s licence or else two matching non-government forms of identification.

A spokesperson for Misneach, the Irish-language activist group behind the protest, said the policy affects many of those who choose to use their names in Irish later in life but who do not have official documentation to prove the authenticity of their names.

A petition on change.org calling on Facebook to change the policy has been signed by more than 600 people.

Irish news website tuairisc.ie reported in July that Laoiseach Ní Choisdealbha, an Irish language officer at NUI Galway, had her account suspended by the company over the use of her name in Irish.

The account was subsequently restored but only under the English language version of Ms Ní Choisdealbha’s name.

The ‘real-name’ policy has been opposed in the US and elsewhere by a coalition of LGBTQ people, Native Americans and survivors of domestic violence.

The #MyNameIscampaign has been advocating for the reform of the policy.

Last year the company said it would amend its policy last year requiring users to go by their real names following an outcry over the blocking of hundreds of accounts belonging to lesbian, gay, bisexual and transgender people.

Many had their accounts suspended after they were reported by people using a dedicated “fake name” reporting option on the site.

The protest takes place at 2pm on October 7th at the company’s Grand Canal HQ.