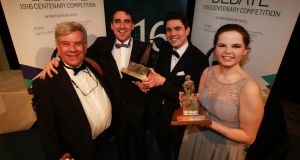 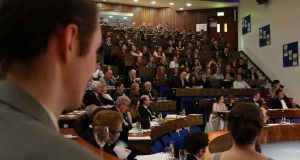 The final of The Irish Times Annual Student Debate at The Royal College of Surgeons in Dublin. Photograph: Nick Bradshaw

Those opposing the proposition that 2016 should be the last year in which Ireland commemorates the Easter Rising were the big winners in The Irish Times Debate grand final.

Clíodhna Ní Chéileachair, a final-year UCD student from Bray, Co Wicklow, won the individual competition. Ms Ní Chéileachair’s great-grandfather took part in the Rising in Enniscorthy and was interned at Stafford and Frongoch. He was awarded a 1916 medal.

Ms Ní Chéileachair (22) told the audience the commemoration was important so we could “attach ourselves to a story that is greater than ourselves”.

The Demosthenes Trophy, for the team competition, was won by Ross O’Mahony (27), from Malahide, Co Dublin, and Aaron Vickery (25), from Rosscarbery, Co Cork, representing the Solicitors’ Apprentice Debating Society of Ireland.

The grand final was held in the Royal College of Surgeons in Ireland, a building that saw much fighting during the Rising. The debate was run in conjunction with Ireland 2016, which is organising the State commemoration.

The event was chaired by UCD professor of history Diarmaid Ferriter, who said the centenary should not be the last time the Easter Rising is commemorated in Ireland, but the first time that it is commemorated properly given the difficulties of the past.

The Rising was a revolution that marked the start of the British retreat from empire, Ms Ní Chéileachair said. Commemoration matters because it is the way that we fill in the gaps and tell the story of the ordinary people involved.

She expected her debating colleague from UCD, Cian Leahy, who finished runner-up in the individual category, to win instead. “I was sad for him that he lost and happy for myself that I won.”

Mr O’Mahony argued that the Rising commemoration was “too important to forget and too dangerous to ignore. If the State ignores its role, it is not a neutral act.”

He also argued that abdicating responsibility handed over the commemorations to the “men in balaclavas”.

His team-mate, Mr Vickery, said his instincts had been to argue in favour of the proposition, but “it makes it easier to realise what they [the opposition] would come up with”.

He argued that the ideals of the Rising are “louder than cannon fire. Those ideals are equality, democracy, independence. They are as relevant today as they were radical then.”

He suggested “identity in Ireland is so rooted in 1916 that people come out of the womb advocating for one faction or another. You’ll know what I mean if you have ever met anyone from Ógra Fianna Fáil. ”

The two other debaters in the individual competition were UCC Philosophy’s Cormac O’Brien and Cadet John Nevin from the Cadet School.

The Trinity College Phil had two teams in the grand final represented by Claire Ní Cheallaigh and Hannah Beresford, and runners-up Sarah Mortell and Caoimhe Stafford.

Ms Mortell also has a link with the Rising – her great granduncle, Thomas Callan, was an Irish Volunteer who took up arms in the South Dublin Union during Easter Week.

Some 300 students entered the competition. The Irish Times debate is the oldest intervarsity debating competition and has run since 1960.

1 Pubs to stay closed and restrictions to remain on all gatherings, Cabinet decides
2 Trump flounders in interview over Covid-19 cases and deaths
3 Europe braces for Covid-19 wave as Spain records 8,500 new cases over weekend
4 ‘This was like a nuclear bomb’: More than 2,700 injured in Beirut explosion
5 Hume brought to Derry as candles in windows light his way
Real news has value SUBSCRIBE