Princess Charlotte: the secret powers of her Co Galway rattle

Willow toy made in An Spidéal, Co Galway has made the princess’ official toybox list 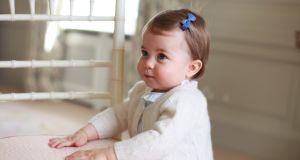 When and if British royal princess Charlotte plays with her willow rattle from Co Galway, she is probably blissfully unaware of the toy’s secret powers.

The rattle woven by Co Galway basketmaker Ciaran Hogan is on the list of presents from 64 countries which she received over the past 12 months, as confirmed by Kensington Palace on the eve of her first birthday on May 2nd.

The Galway toy is competing with a 18k white gold rattle studded with diamonds, rubies and sapphires made by the Natural Sapphire Company, valued at £30,000, and a silver rattle brought by Mexican president Enrique Peña Nieto, and his wife, Señora Angélica Rivera, during their State visit to Britain last year.

However, The Daily Telegraph decided that Mr Hogan is likely to have won “the battle of the rattles” with his “simple willow one”.

Mr Hogan presented his “royal rattle” to Prince Charles and the Duchess of Cornwall in Galway a year ago, when they were on their official visit to the west of Ireland.

However, he didn’t have much time to explain its talisman qualities to the princess’s grandfather, and was surprised to see it crop up on the princess’s official toybox list on Monday.

He says the princess’s family may not have known - until now - that the rattle is based on a traditional design used by Mr Hogan’s father, Joe Hogan from Caltra, Co Galway.

Seven stones inserted inside the willow weave represent the “seven deadly sins”, which have changed over time but are generally accepted to include pride, greed, lust, malicious envy, gluttony, wrath and sloth.

“So whenever the child rattles, she is shaking the sins off, “Mr Hogan told The Irish Times.

Mr Hogan says he can’t quite remember if all seven stones, picked off a beach at An Spidéal, are in that particular version, but “at least she’ll get rid of some of the sins anyway”.

He expects a bit of a run on the toys, which he makes at An Ceardlann craft village in An Spidéil and sells for €15.

Also in the princess’s toybox are books, teddy bears, a jigsaw from US president Barack Obama, a copy of Hans Christian Andersen’s fairy tales from British prime minister David Cameron and a set of silk figurines depicting a 19th century Chinese novel, The Dream of The Red Chamber, from Chinese president Xi Jinping.