Prince Charles in Galway: ‘You raise our spirits in so many ways’ 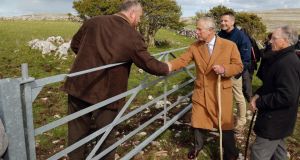 Prince Charles on the Burren shakes hands with local farmer Oliver Nagle with his father Pat (right) during his visit to the locality. Photograph: Getty Images

Some 24 hours after the historic handshake and private meeting with Sinn Féin leader Gerry Adams, Britain’s Prince Charles is due to visit Mullaghmore harbour in Co Sligo where his great-uncle Lord Louis Mountbatten was killed by an IRA bomb 36 years ago.

However, peace and reconciliation was the dominant theme during the first day of the British royal couple’s visit to the west of Ireland, with Prince Charles paying tribute to a “magic about Ireland that is totally unique”.

“Having first had the privilege of coming to Ireland in 1995 and then again in 2002, each time I have been so overwhelmed and so deeply touched by the extraordinary kindness, the welcome and indeed the fun of being in Ireland,” he said at NUI Galway.

“Apart from anything else, the chance of plenty of good jokes and laughter make the whole difference to life,”he added. “You raise our spirits in so many ways.”

Accompanied by his wife, the Duchess of Cornwall, Prince Charles was welcomed on touchdown at Shannon Airport on Tuesday morning by Oireachtas foreign affairs committee chairman Pat Breen (FG).

The couple were taken by helicopter to Galway where they were greeted on campus by Tánaiste Joan Burton, Minister for the Arts Heather Humphreys and NUIG president Dr Jim Browne.

The public had limited sight of the arrival due to tight security and road closures, but a peaceful protest included members of the Socialist Workers Party, Republican Sinn Féin, the Galway Anti-Monarchy Group and NUIG students campaigning for gender equality.

The duchess was presented with a bouquet of English roses before the couple were led into a marquee in NUIG’s quadrangle, exhibiting a flavour of arts, crafts and culture. They were presented with a woollen blanket and a willow rattle, woven by basketmaker Ciarán Hogan, for “the newborn princess, Charlotte”.

Prefacing his remarks with some Irish – “a dhaoine uaisle” – Prince Charles spoke of Ireland’s “magic”, admitted to being “a little too old to learn the steps of the Irish dancing routine” and spoke of the “fun” of being here.

After his private discussion with Mr Adams and Sinn Féin Deputy First Minister Martin McGuinness, Prince Charles left by motorcade for the Marine Institute, where he was met by Taoiseach Enda Kenny and Minister for the Marine Simon Coveney.

When Dr Wheeler presented him with a 330 million-year-old piece of fossil coral from Streedagh, near Mullaghmore in Co Sligo, the prince was quick to note that the fossil was “as old as the Burren”.

Before departing for Co Clare, he was briefed on the first transatlantic mapping survey to take place under the Atlantic Ocean Research Alliance between the EU, Canada and US.

The prince said he would love to return again to the unique Burren landscape after he spent close to an hour in the karst landscape, meeting local farmers Pat Nagle (67) and his son Oliver (42), who live near Slieve Carran and are involved in the BurrenLIFE conservation project.

After that, the duchess was treated to the opening scene of DruidShakespeare’s Richard II at the Mick Lally Theatre, where she met artistic director Garry Hynes and cast.

Her final engagement in the city was a food sampling, where she was given a cocktail of Dingle gin, elderflower liqueur and champagne.