Praise for campaigners as Orkambi deal agreed with HSE 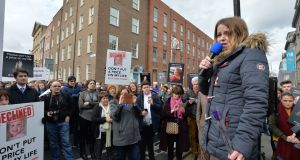 Gillian McNulty, who is on an Orkambi trial, addresses a cystic fibrosis protest at the Dáil earlier this year. Photograph: Alan Betson

Campaigners who “never stopped fighting” have been praised as a long-awaited deal to make life-saving drugs available to up to 600 people with cystic fibrosis has been announced.

After nine months of negotiations, the Health Service Executive (HSE) and Vertex Pharmaceuticals reached an agreement in principle on terms for the supply of the drugs Orkambi and Kalydeco from next month, Minister for Health Simon Harris has told the Dáil.

He was “determined this process would conclude and we would get the best possible arrangement for CF patients’’.

Cystic fibrosis is an inherited chronic disease of the lungs and digestive system which affects about 1,200 Irish people. Orkambi and Kalydeco improve the lung function of many patients and significantly reduces hospitalisations.

It will probably be the most expensive drug agreement ever reached by the State, though Mr Harris did not reveal the cost of the deal. Vertex initially sought €159,000 per patient for Orkambi, which the HSE estimated would have cost the State around €400 million over five years. Before the talks began, it said it was willing to pay up to €75 million.

Cystic Fibrosis Ireland chief executive Philip Watt “warmly welcomed” the news , saying it would be “inclusive of all patients who have the potential to benefit”.

A Vertex spokeswoman said: “We look forward to continuing to work urgently with the HSE over the coming days to finalise the agreement in the best interests of Irish CF patients who have waited long enough for these important medicines.”

Fianna Fáil leader Micheál Martin said: “Despite many setbacks over the past number of years, they never stopped fighting, they never gave up hope, and finally they have the decision they have dreamed of.”