Postmortem due tomorrow on Irish student who died in London 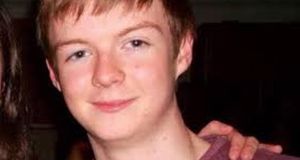 Patrick Halpin who became separated from his friends after he went to get food.

A postmortem is expected to be carried out tomorrow on the body of Galway student Patrick Halpin (18) found dead on a roof in London’s Leicester Square last week.

A spokesman for the Metropolitan Police said the postmortem was scheduled f at the Westminster Memorial Park Mortuary.

He added that because the death was not being treated as suspicious, it was possible the examination could be delayed to allow for more urgent cases to be dealt with.

Once the postmortem is complete the body will be released to the family.

The youth had left fellow Dublin City University students gathered in the Zoo Bar on Bear Street, off Leicester Square, shortly after midnight on Tuesday, saying he wanted to get some food.

He walked less than 20 metres to the Burger King restaurant, where he was recorded by CCTV entering the building, before sight was lost of him.

Initially, it was understood that Mr Halpin may have gained access to the roof through an external stairs, although this is blocked off half-way up by a steel door and steel netting, where entry would only be possible if the door had been open.

His father Paddy, and 22-year-old sister Regina, who had travelled to London to assist with the search after the alarm was raised on Wednesday afternoon, have returned to Ireland.

Questions remain about how the Halpin family was erroneously told on Thursday that their son had checked in at Gatwick Airport.

His father and sister rushed to the airport, only to have their hopes dashed after it emerged that his name had been spotted as part of a group booking by the students.