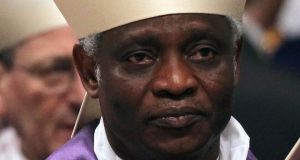 Pope Francis intends to publish an encyclical letter later this year on the theme of human ecology that will explore the relationship between care for creation, integral human development and concern for the poor, Cardinal Peter Turkson has stated on a visit to Northern Ireland.

The Ghanaian cardinal, who is viewed as a potential future pope, said that as the “threat of environmental catastrophe” was confronted on a global scale, he was “confident that a shaft of light will break through the heavy clouds and bring us what Pope Francis describes as the warmth of hope”.

The 66-year-old cardinal, who is president of the Vatican Pontifical Council for Justice and Peace, spoke at St Brigid’s parish in south Belfast.

The cardinal is delivering the 2015 Trocaire Lenten lecture at St Patrick’s College, Maynooth on Thursday night.

In his Maynooth address, Cardinal Turkson will say that the timing of the planned papal encyclical was “significant”, as 2015 is “a critical year for humanity”, with a number of international initiatives taking place on sustainable development and slowing global warming.

The cardinal will also say: “The threats that arise from global inequality and the destruction of the environment are interrelated; and they are the greatest threats we face as a human family today.

“We all have a part to play in protecting and sustaining what Pope Francis has repeatedly called our common home.”

Cardinal Turkson will say that an “integral approach to ecology” was required, “not one limited to scientific, economic or technical solutions”.

During his St Brigid’s address, Cardinal Turkson said that Pope Francis has been “giving expression to a growing concern among many Christians, including in this part of the world, that under the guise of secularity, Christianity and religious faith generally is being more and more relegated to the sphere of the purely private”.

“It is as if there is an assumption that secularism, or a society without reference to God, is uniquely qualified to mediate, manage and govern authentic pluralism and diversity.

The cardinal said that a more thorough critique is needed of the view that secularism is a “neutral approach to life”, and one that can “mediate the public square” alone.