Plane lands safely in Dublin after fuel dump due to emergency 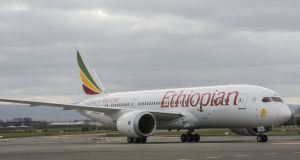 An Ethiopian Airlines flight had to dump thousands of litres of fuel and return to Dublin after they experienced engine problems over the Atlantic.File photograph: Brenda Fitzsimons / The Irish Times.

The crew of a US-bound jet was forced to dump thousands of litres of fuel and return to Dublin after they experienced engine problems over the Atlantic.

Ethiopian Airlines flight ETH-500 left Dublin shortly after 6am on Friday but was forced to turn around an hour later.

The flight had been travelling from Addis Ababa in Ethiopia to Washington DC via Dublin. The flight arrived in Dublin at around 4.45am.

The Boeing 787-800 Dreamliner had been cruising at 40,000 feet and was about 600km northwest of Donegal when the pilot declared an emergency at about 7.30am.

The crew had been in contact with controllers at the Irish Aviation Authority’s North Atlantic Communications Service centre in Co Clare and advised them that they had to shut down one of the jet’s two engines.

The crew requested clearance to descend to 25,000ft and told controllers they would also need to dump fuel so they could land within safe weight limits.

After spending 10 minutes jettisoning fuel, the crew was asked by controllers whether they were diverting to Shannon or Dublin. The pilot opted to return to Dublin where fire and rescue crews were placed on standby.

The jet reached the airport on it’s one remaining engine and landed safely at 8.35am. The aircraft was pursued along the runway by emergency vehicles which also remained with the jet until it reached the terminal building.

Engineers are now investigating the problem.

One inbound flight was placed in a holding pattern for a short time to allow the emergency aircraft a priority landing.