Harbour Company seeks to build 50 houses on pontoons at prices of up to €300,000 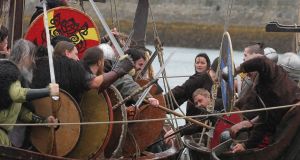 Dún Laoghaire harbour in Dublin could soon be home to up to 50 houses on floating pontoons.

Under a plan put forward by the Dún Laoghaire Harbour Company, a site adjacent to Traders’ Wharf has been identified in which the houses would be built on concrete bases and set on pontoons.

A notice inviting private housebuilders with expertise in such projects to become involved in the project was published on the Government’s e-tenders website on Friday.

The company’s chief executive, Gerry Dunne, said the development would not be “an exclusive gated community for the privileged few” and would be aimed at those seeking “starter or retirement” homes.

The concept is modelled on similar water-based housing developments in Portland, Maine in the US and British Columbia in Canada. It is understood that planning permission will have to be sought from Dún Laoghaire-Rathdown County Council for the development.

Floating boats have been used as homes in Britain and Ireland, notably St Katharine Docks in London and to a small extent at Grand Canal Dock in Dublin.

However, the plan for Dún Laoghaire is for more traditional homes, possibly with a nautical theme.

Mr Dunne said the homes would be in a very sheltered area at the western end of the harbour, behind two breakwaters. They would be about 100m from the West Pier in an area close to the Quay fish shop. He said the development would not interfere with any existing harbour users.

The homes would be moveable but will “not be boats”, Mr Dunne said.

Following discussions about a floating hotel in the harbour last year, Mr Dunne said the concept of providing housing was a “natural extension of the discussion”.

Maintenance costs at the harbour, which consists of 200 acres of water space and 50 acres of land, are high and it has seen income fall since the Stena Line ferry pulled out in 2015. The company last year spent €1 million on repairs to the Carlisle Pier and further repairs are needed to the West Pier.

The company is also in discussions with an unnamed private entity on converting the former Stena ferry terminal into an office building.