‘I went down on a rope about five metres, took up one at a time,’ says Connemara man 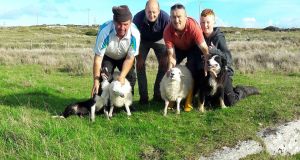 A sheep and two lambs trapped for over seven weeks on a Connemara island cliff ledge have been rescued by a team of Cleggan men.

Cleggan resident Michael Murray and neighbouring farmers managed to lift the animals to safety on Friday on the deserted island of Inishark.

The ewe and her two lambs had been in some distress for almost two months, struggling to survive on a small patch of grass on the ledge which was nourished by frequent rain.

Peter Anthony Lacey, whose grandfather Thomas was the last man to leave Inishark when it was evacuated in 1960, had first spotted the animals on the western cliffs some weeks ago.

The animals had descended onto the ledge, tempted by sweet grass, and had been unable to return up onto the main pasture. Weather and swell and the precipitous location precluded a rescue attempt.

“I went down on a rope about five metres (15 ft) , took up one at a time, and we chased them over to the other side of the island,” Mr Murray said.

“But after a cup of tea, we decided to take them back to the mainland. I don’t think anyone will want to eat those sheep for a long long time...

“Hopefully the owner might buy us a pint, or at least give us a ticket for the All Ireland hurling final,” Mr Lacey said, paying tribute to the efforts of his team mates, including Mr Murray - a “fearless man”.