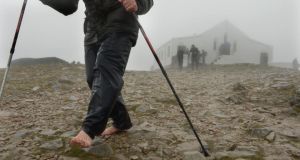 Pilgrims at the summit of Croagh Patrick, Co Mayo, on Sunday. The annual climb takes place every year on the last Sunday in July. Photograph: Dara Mac Dónaill 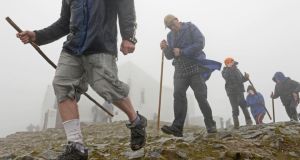 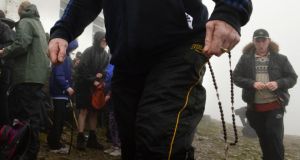 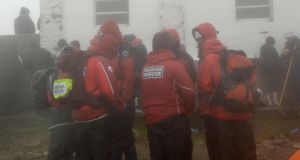 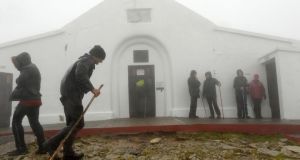 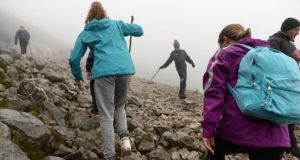 When high winds whisked the glass oratory off the tiny church on Croagh Patrick’s summit, John Cummins knew the mountain was in trouble.

Cummins, who once had his wedding up there, phoned Westport parish priest Fr Charlie McDonnell at 4.45am yesterday, and told him he hadn’t seen anything like it in 47 years.

“One man who had decided to make the climb during the night had to lie flat on the ground when he reached the top ,”Fr McDonnell was told.

A geodesic mountain rescue tent built for Himalayan conditions had been flattened, and its pole had snapped in the early hours. An Order of Malta tent was almost blown away.

Fr McDonnell convened a meeting with Archbishop of Tuam Dr Michael Neary, the Garda Air Corps, the Mayo Mountain Rescue Team and the Order of Malta. By then Met Éireann had issued a status yellow weather warning for heavy rainfall of between 25 to 30mm.

The consensus was that the annual pilgrimage was too risky on health and safety grounds – a big decision, taken quickly in the light of some “1,500 uninterrupted years”, according to Catholic Church press officer Martin Long who had travelled to accompany Dr Neary up for Mass.

Fr McDonnell agreed that Masses would be transferred instead to sea level, at Lecanvey church, and the Garda Press Office would issue the cancellation notice.

“I came from Beijing and I’ve been walking for four days with a group via Ballintubber Abbey from Knock,” Fr Tony Murphy, a Columban missionary from Castlebar, explained. “I’m here for the Reek and the Connacht final,” he added, cheerfully. “Sure, we’ll see what it’s like further up.”

Inside the Mayo rescue team marquee, members of Glen of Imaal, Kerry, Dublin and Wicklow and North-West teams, along with the Irish Cave Rescue Organisation and Order of Malta, were philosophical. Some had been on duty right through the night, but they knew that they would not be stood down.

Conditions were impossible for Air Corps helicopter flights, volunteer Suzanne Erskine explained. “We were all back at home at 11.30pm last year when we got called out!”

Sean Byrne and Diarmaid Scully of the Glen of Imaal mountain rescue have been volunteering for Reek Sunday for nearly 30 years between them.

“It’s when the weather is good, and you get the big crowds, that the accidents happen. In bad weather, people tend to be much more careful,”they said. Most trouble-free are the barefoot pilgrims, who tend to be so cautious that they rarely if ever fall.

“And no one will make a decision about it, as it gets steadily worse,”she said.

Inside the medical “station”, Ballina GP Dr Scott Walkin, rescue team volunteer Mary Sheridan, and Order of Malta first aiders Ruth Foley, Mark Ecock and Keelan Moran were shooting the breeze. There had only been three cases requiring treatment so far. By evening, ten people had been treated by emergency services, mainly for hypothermia and grazes, and it was estimated that 5,000 people had climbed.

“Our main challenge has been keeping the tent off us when it flattened in the gusts,” Dr Walkin said, explaining how he used pieces of willow as cable ties to hold the damaged pole in place. He took out his cooking gear, sausages and rashers. It was time for a “morale-boosting fry”.

On the route, father and daughter Joe and Suzanne Nolan from Brickens near Claremorris were descending to Murrisk, saturated but relieved. “We’ve a combined age of 101,” they said. “But it’s the worst we’ve ever seen up there.”

North-West mountain rescue volunteers Barney O’Loughlin from Belleek in Co Fermanagh and Stephen Forrest from Limavady watched the continuing procession – one man bare-chested in shorts – with a mix of wonder and awe.

“Whatever you think, it’s a fantastic reflection on our culture that people are so determined, won’t turn around, won’t give up,” Forrest said.

“Nobody’s rushing. Sure wouldn’t it do your heart good to see it?”