Philomena Lee says pope must act on his promise to survivors

A US-based research group, BishopAccountability.org, have released a database of convicted Irish clergy but claim that the 90 names represent only seven per cent of the total accused priests. Video: Enda O'Dowd 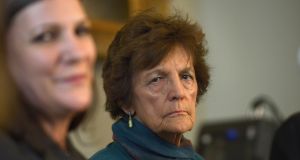 Philomena Lee: “I do pray within my heart that something good will come out of this. It was so awful.” Photograph: Brenda Fitzsimons / The Irish Times

Mother and baby home survivor Philomena Lee has called on Pope Francis to match his words with deeds to help those who have been harmed by the Catholic Church in Ireland.

Ms Lee (85) was the subject of the 2013 film Philomena which detailed her experiences in the mother and baby home run by the Sisters of the Sacred Hearts of Jesus and Mary in Roscrea.

Ms Lee’s son, Anthony, was born there in 1952 and given up for adoption to the US three years later.

He grew up as Michael Hess and became senior counsel to the Reagan and Bush White House administrations.

In later years, both Mr Hess and Ms Lee were simultaneously trying to find one another, but he died of Aids in 1995, before he could be reunited with his birth mother.

Her story of trying to find her son was turned into a book by the journalist Martin Sixsmith and then a film.

I wonder if he knew all the years back what was going on. He probably didn’t know

Ms Lee said her meeting with the pope had been brief and that the pope may have only found out the full extent of mother and baby homes when he met Clodagh Malone and Paul Redmond on Saturday, as part of a group of clerical abuse survivors. They were both born in such homes.

They said the pope was “taken back” and “shocked” to be told the scale of practice in Ireland of mothers being forced to give their children up for adoption. He had also never heard of a Magdalene laundries before.

“Maybe he was so shocked about what he heard that maybe he will do something about it,” Ms Lee said.

“When I met him, he shook hands and gave me a rosary beads. In my heart I believe he is doing his best. I wonder if he knew all the years back what was going on. He probably didn’t know. He is getting blamed for the whole lot, but he is the head of the Catholic Church.”

She watched much of the pope’s visit to Ireland on television and heard him say that it was not a mortal sin for mothers to go looking for their children.

The pope has gone a long way to doing something, but he can’t let it lie

It followed Saturday’s meeting at which Ms Malone and Mr Redmond stressed to the pope that many elderly women, who were forced to give their children up for adoption, had been told that it was a “mortal sin” to go looking for them.

They asked the pope to make it clear to these women that it was not a mortal sin and he obliged at the Papal Mass in the Phoenix Park.

Ms Lee commented: “We were indoctrinated that it was a terrible mortal sin that we would go straight to hell if we looked for our babies. I don’t believe that anymore.

“I’m 85 now and I realised a long time ago that it wasn’t a mortal sin. We were called Magdalenes even in the mother and baby homes.

“I left Roscrea in 1956 and they sent me to work in a boys’ home in Liverpool and from that day to this I haven’t been to confession.

“I do pray within my heart that something good will come out of this. It was so awful.”

She said the pope’s visit to Ireland will go some way towards accountability for the past sins of the Catholic Church, but the church also needed to make reparations to those it had harmed.

She called on the church to hand over all its records relating to mother and baby homes, though in her case a lot of the records were burned.

“I will have my eyes and ears open to see if he will do anything. The pope has gone a long way to doing something, but he can’t let it lie. There is a lot of forgiveness to be done.”