US talks chairman has now met all the main Northern parties 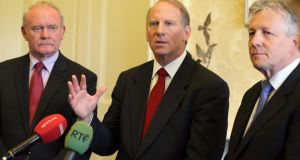 Northern Ireland First Minister Peter Robinson has impressed on US diplomat Dr Richard Haass the challenging task he will have in finding agreement on the difficult issues of parades, flags and emblems, and the past by the deadline of Christmas.

A resolution would not be possible by late December, Mr Robinson said in Belfast yesterday after he led a DUP delegation in talks with Dr Haass, who is chairman of the all-party Assembly group charged with addressing these three issues.

Dr Haass met the DUP, the Ulster Unionist Party and Alliance yesterday after holding talks on Tuesday with Sinn Féin and the SDLP.

He has now met all the five parties ahead of a plenary meeting with them tomorrow.

“Do I believe we will be able to have all of these issues cut and dried and resolved by Christmas, no I don’t,” said Mr Robinson. “Do I believe that there can be progress on each of them and some more than others, yes I do. I believe it is possible to make progress.”

Mr Robinson made clear his party would be approaching these talks from a unionist and loyal order perspective. “We believe that there are certain freedoms that need to be enshrined and protected. One of those clearly is the ability for people to assemble and to parade and we have obviously indicated how important that is to our community – that it is part of the unionist, loyalist, Protestant culture in Northern Ireland.”

Mr Robinson also anticipated hard bargaining towards the closing period of these talks. “November and December will be the tough months when we have to get down to the real work,” he said.

The Alliance East Belfast MP Naomi Long said her party was “determined but not naive” regarding the potential for success of the inter-party discussions.

“Any potential success emanating from these talks will require strong and generous leadership from local parties, something which has been clearly lacking over recent months,” she said after meeting Dr Haass.

“It will also require commitment not only to agree but to see those agreements through in practice. Independent chairmanship is important in facilitating agreement, which is why Alliance proposed it, but the drive and commitment to deliver results must come from local parties.” Dr Haass also met one of the loyal orders yesterday, the Royal Black Institution which described the discussions as “worthwhile and constructive”.