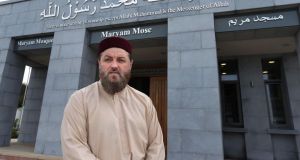 Imam Ibrahim Noonan at the entrance to the Maryam Mosque on the Old Monivea Road, Ballybrit, Galway. Photograph: Joe O’Shaughnessy

When Imam Ibrahim Noonan began celebrating the Qu’ran in a housing estate in Galway, his hope was that the temporary mosque in Wellpark would be replaced by a permanent structure.

Now, four years after foundation stones were laid on a site opposite Ballybrit racecourse, there’s a new minaret on the city skyline – marking the Ahmadiyya Muslim community’s first Irish house of prayer.

“There is none worthy of worship except Allah; Muhammad is the Messenger of Allah,” reads the Arabic and English script carved into limestone above the oak doors of the Masjid Maryam ( Mosque of Mary).

“You can see the height gives a beauty to it, and there’s a bit of an echo as well,”says Imam Noonan, looking up at the dome which is also inscribed in Arabic: “There is no greater contentment than remembrance of God in the heart.”

Originally from Waterford, Imam Noonan was 23 when he converted to Islam while living in London. He and his family are now among 500 members of the Ahmadiyya Muslim community in Ireland, and among almost 200 in Galway city and county – some of whom have been there since the late 1960s.

Founded by Mirza Ghulam Ahmad in 1889, the Ahmadiyya faith has up to 200 million worshippers in 200 countries, mainly in several African states, Pakistan and Indonesia, with up to 30,000 in Britain and 15,000 in north America.

The community believes in non-violence and tolerance of other faiths, separation of religion and state, and “jihad” or “struggle” by the “pen rather than by the sword”.

“Theologically, we agree 99 per cent with orthodox Islam, but 1 per cent separates us,” Imam Noonan says.

“Orthodox Islam believes that no prophet would return after Muhammad, but we also believe that a follower could come when needed, and he is the founder of our community.”

Killings and burnings of Ahmadiyya mosques have been rife in Pakistan since General Zia-ul-Haq’s administration banned them from identifying themselves as Muslims in the mid-1980s.

Twenty of those 60 in direct provision are in Galway, including Laiq Naseer, who shares one room in Salthill’s Eglinton Hotel with his wife and three sons – aged 16, 11 and four. Having been refused application for asylum, his case has been before the High Court for five years and he awaits the outcome of a hearing held in July 2013.

“I have cataracts, diabetes, high blood pressure; I suffer from depression and it is very hard on my wife and all my family,” he says. “It is very difficult and it is too dangerous to return home.”

Several of his compatriots came as single men, including Saeed Ahmad who says he was lucky. His asylum application took just six months, but some neighbours from Rabwah in Pakistan, who sought refuge with him, are still living in the Great Western hostel in Eyre Square.

Imam Noonan is concerned about them all, but particularly about one man whose wife and mother have both died back at home.

The mosque project in Galway has been the community’s one constant beacon of light. The €1.5 million project was funded by the Ahmadiyyas themselves and built by an Irish contractor, using smooth cut limestone from Connemara.

“We felt that it was important to engage an Irish company as a way of interracting with the community,” Imam Noonan explains.

As a result, a large Galway turnout is anticipated when the supreme head of their faith worldwide, His Holiness Hazrat Mirza Masroor Ahmad, inaugurates the mosque next Friday. Imam Noonan points out that the the leader has been outspoken in condemning radical Islam.

“There is a hadith, or saying, by the prophet that the time will come when the mosques will be full of worshippers but there will be no righteousness, and that you will have the Qu’ran in the most beautiful decoration but you will not have any understanding of it, and there will be scholars or imams who will think up the most evil plans,”he says. “But the prophet also said that there will be one community on the path of righteousness and we believe we are that community,” he adds.

Imam Noonan said he found it shocking to learn that Irish people were volunteering to fight with Islamic State (IS).

“If the imams condemned violence after 9.11 and spoke only of righteousness – even when George Bush was speaking of his war on terror – perhaps all these people now in their 20s would not be radicalised,” he says.

“I’ve been to Israel and, like most Muslims, we grieve at the pain of so many Palestinians in Gaza, but a number of young Hamas people said to me that they were fed up with the blood and the violence and told me they were, ‘fed up with our imams telling us to kill the Jews’.

“I feel like Islam has been set back 20 years in Europe in terms of convincing people that it is a peaceful religion, and Isis has done that,” he says.