Patrick Quirke letter to agony aunt: I’ve ‘made a right mess of my life’ 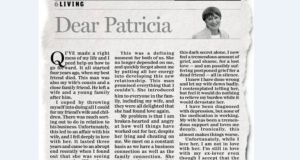 A copy of the letter written to the Sunday Independent Dear Patricia column by Patrick Quirke in 2011.

Convicted murderer Patrick Quirke wrote a letter to an agony aunt which revealed his state of mind and was published in a national newspaper four months before he killed Bobby Ryan.

Quirke admitted to having been diagnosed with depression because of the end of his relationship with Mary Lowry and said “none of the medication is working”.

The letter was published in the Sunday Independent in the popular Dear Patricia column on February 20th, 2011 which featured clinical psychologist Patricia Redlich.

Quirke was yesterday convicted of murdering Mr Ryan on June 3rd of that year.

The letter was read out at the trial but the response from Ms Redlich was not presented to the jury.

In the letter, Quirke admitted he had “made a right mess of my life” and needed help to move forward.

He had had an affair with the widow of his best friend. Initially, he had helped her with business matters after her husband’s death but this had led to a sexual relationship.

“I fell deeply in love with her. It lasted three years and came to an abrupt end recently when I found out that she was seeing someone else,” he wrote.

That someone else was Mr Ryan.

In his letter, Quirke said: “When I confronted her, she claimed that she had fallen out of love with me and was waiting for an opportunity to end ‘us’.

“This was a defining moment for both of us. She no longer depended on me, and quickly forgot about me by putting all her energy into developing this new relationship. This man promised everything that I couldn’t. She introduced him to everyone in the family, including my wife, and they were all delighted that she had found love again.”

Quirke confessed to being “broken-hearted and angry at how well things have worked out for her, despite her lying and cheating on me”.

He thought about telling his wife (Imelda), but concluded “it would do nothing to relieve my burden while it would devastate her”.

Nevertheless, he praised his wife for being a “tremendous support and loves me deeply”.

With his love for Ms Lowry no longer reciprocated, Quirke admitted. “While I love her, I am not in love with her. I’m still in love with my ex-lover even though I accept that the affair is over. I wish I wasn’t, and wish I could transfer the feelings I have for her back to my wife. How do I begin to rebuild my life?”

In her response, Ms Redlich,who died in August 2011, replied in forthright terms: “You could begin by ditching the self-pity”.

She explained wrong-doers cannot be allowed the luxury of saying they are having a hard time as a consequence of their actions.

“You chose to have an affair. It’s gone south. Tough. And that’s letting you off lightly.”

She posited an alternative version of his story could be told of a man who had taken advantage of a vulnerable widow.

She continued: “A married man with any decency would definitely have backed away. It could be argued, in short, that you’ve broken faith with two women. Not to mention the fact that all of this is effectively happening within the family, so very definitely in your own backyard. Not nice.”

As her married lover, he had no claim on her anyway and she had moved on just has he had moved on when he decided to cheat on his wife, she told him.

“Lies were the basis of your relationship. How can you whinge that she then failed to come clean on finding a new lover? Don’t you see? You have absolutely no right to be angry at her. Affairs carry no commitments.”

Though the letter was written anonymously and no names were mentioned, there were enough details for Ms Lowry to immediately identify the writer of the letter as Quirke.

At the trial, Ms Lowry said she confronted Quirke immediately after reading The Sunday Independent and Quirke admitted he sent the letter.

She asked him if his wife Imelda had seen it and he admitted he removed that page from the newspaper.

He said he sent the letter because he had nobody else to turn to.