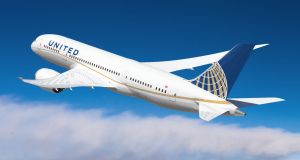 One person was taken to hospital and several others sustained minor injuries when a United Airlines flight encountered severe turbulence during its descent into Dublin today.

One person was taken to hospital and several others sustained minor injuries when a United Airlines flight encountered severe turbulence during its descent into Dublin today from the United States.

Flight UA23, a Boeing 757 en route from Newark airport in New Jersey to Dublin with 129 passengers and eight crew on board, landed safely at the airport shortly before 7am where it was met by medical personnel and United Airlines customer service staff.

Seven passengers were treated by medical staff at the airport and one passenger had to be taken to hospital but has since been discharged.

A spokesman for the airline said it was conducting a review into what happened. He said the seatbelt sign came on during the period of turbulence.

A spokeswoman for the Dublin Airport Authority said airport police and emergency services attended the scene but confirmed that the plane had landed safely.