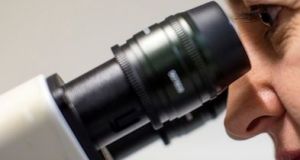 Ulster University, in partnership with the University of Oxford and funded with €210,800 from the Pancreatic Cancer Research Fund, will investigate if microbubble technology can provide a similar boost alongside traditional radiotherapy treatments. File photograph: Getty Images 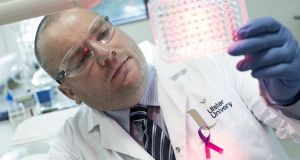 Ulster University’s Prof John Callan said it was well known that oxygen levels in pancreatic tumours are extremely low and certain cancer treatments require a good supply of oxygen to be effective.

An Ulster University study is to investigate if new “microbubble technology” together with radiotherapy can improve treatment for pancreatic cancer sufferers, it was announced on Friday.

The novel combined therapy, according to the Ulster University, was found to spare healthy tissue and reduce the side effects of conventional treatment, as well as deliver improved reductions in the size of the most common pancreatic tumour known as pancreatic ductal adenocarcinoma (PDAC).

The university, in partnership with the University of Oxford and funded with £180,000 (€210,800) from the national charity Pancreatic Cancer Research Fund, will investigate if the microbubble technology can provide a similar boost alongside traditional radiotherapy treatments.

Ulster University’s Prof John Callan said it was well known that oxygen levels in pancreatic tumours are extremely low and certain cancer treatments require a good supply of oxygen to be effective.

“Last year, we demonstrated that by combining our microbubble technology with ultrasound we can help deliver oxygen to pancreatic tumours and help improve oxygen levels in the tumour,” he explained.

“This latest strand of research will look specifically at radiotherapy, a treatment used by almost half a million people undergoing cancer treatment annually,” he added.

“It is a very effective way of controlling symptoms but it is limited by poor oxygen supply. By examining our microbubble technology in combination with radiotherapy, we hope to improve its effect on pancreatic cancer,” said Prof Callan.

Mark Taylor, the lead consultant hepatobiliary and pancreatic surgeon in the Belfast Health and Social Care Trust and a collaborator on the project, said the study was an “exciting project that involves combining a new microbubble technology for pancreatic cancer with existing radiotherapy treatment.

“By improving tumour oxygen levels, it is hoped that the radiotherapy treatment will be more effective,” he explained.

“It may also be possible to combine the radiotherapy treatment with other drugs delivered using the microbubble technology to further enhance the effect. With little progress made in survival rates over the last 40 years, there is a real need for new treatments to combat this disease,” he added.

Mr Taylor stressed, however, that “this is still in the research phase and it will be several years before the treatment is considered for use in humans”.

Pancreatic cancer is the fourth most common cause of cancer-related deaths globally and has the worst survival statistics of the 21 most common forms of cancer, with only 3 per cent of patients surviving five or more years after their initial diagnosis. While other forms of cancer have seen survival rates improve significantly over the past four decades, the survival rate for pancreatic cancer has remained unchanged.