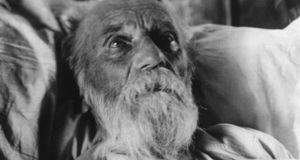 The funeral of Fenian leader Jeremiah O’Donovan Rossa in August 1915 was a rehearsal for the 1916 Easter Rising and was a triumph of theatre for radical Irish nationalism, a conference has heard.

Prof Michael Laffan, of the school of history and archives in UCD, said that O’Donovan Rossa’s funeral in Glasnevin with an oration delivered by Pádraig Pearse, was “in retrospect, a perfectly calculated prerevolutionary act”.

Speaking at a conference in O’Donovan Rossa’s native Rosscarbery, Co Cork, to mark the centenary of the Fenian’s death in New York in 1915, Prof Laffan argued that O’Donovan Rossa’s funeral should be seen in the context of other Irish political funerals aimed at stirring a national consciousness.

“In 19th and early 20th century Ireland, funerals and related commemorations were often the best - and sometimes the only - way whereby people could express solidarity against the policies of the agents of the London government and they were used to good effect,” he said.

Prof Laffan said funerals were both a way of expressing protest and pointing out to the authorities that they may have had the power but nationalists had the people and represented the past.

In a lecture entitled Burying Rossa: O’Donovan Rossa in the Irish nationalist funereal tradition, Prof Laffan argued that once O’Donovan Rossa’s widow Molly took the advice of the Clann na Gael leader, John Devoy, to let Tom Clarke organise the funeral, extremists were in control of the event.

“Clarke, under the auspices of the Wolfe Tone Memorial Committee, a cover for the IRB, became president of the funeral committee and he established 15 sub-committees that met twice daily and reported weekly,” he said.

Two weeks before the funeral on August 1st, Clarke wrote to his sister-in-law Madge Daly that “from the reports we are receiving from different parts of the country, the funeral promises to be the largest ever seen here since that of the Manchester Martyrs”, Prof Laffan said.

In the event, more than 100,000 people passed before O’Donovan Rossa’s body as it lay in state at the Pro-Cathedral and Dublin City Hall and at least 60,000 people lined the streets of Dublin as the cortege made its way to Glasnevin Cemetery, where Pearse delivered his oration.

“In some respects, the funeral was a rehearsal for the Rising - another triumph of theatre.

“Thomas MacDonagh was commandant-general and Edward Daly was placed in charge of all the military bodies, the Irish Volunteers, the National Volunteers and a small section of the Citizen Army.”

Prof Laffan said that The Irish Times estimated that about 5,000 rifles were carried in the procession and that at least 7,000 of the marchers were “healthy young men of military age”.

The procession also included trade societies, the GAA and a large contingent of clergy.

Pearse had been chosen by Clarke to deliver the graveside oration and he lived up to Clarke’s expectations, ending his speech with the incantation “the fools, the fools, the fools - they have left us our Fenian dead and while Ireland holds these graves, Ireland unfree shall never be at peace”.

“It was not only an example of ‘the dead hand of the past’, but it was also an oratorical incitement to future violence - against a British administration that was characterised by its mildness and forbearance,” said Prof Laffan.

“As intended, the funeral was a prelude to rebellion. It linked the IRB and radical Irish nationalism to a tradition of hostility to British rule,” he said.

From “beginning to end, the funeral was a spectacular dramatic performance”, Prof Laffan said.

“Until then, Irish republicans might have had an unimpressive record of insurrection but they had excelled in dramatic gestures.

“O’Donovan Rossa’s funeral was high theatre. The next performance by the same company would take place the following Easter.”