O’Carroll defends pledge of €30,000 to businessman in need of start-up finance 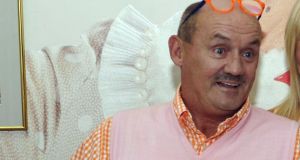 Brendan O’Carroll: said the man was under pressure, but had an idea that he thought might work and get him out of trouble. Photograph: Aidan Crawley

Comedian and actor Brendan O’Carroll has defended a decision to invest €30,000 in a business idea put forward by one of his guests on RTÉ Radio at the weekend. O’Carroll was standing in for presenter Marian Finucane in her Saturday and Sunday morning slots.

On Saturday, he included an item on people in financial difficulties with the help of Portlaoise-based charity, the Phoenix Project, Inner City Helping Homelessness and other organisations. During the show, businessman Eddie Molloy (61), from Granard, Co Longford, told O’Carroll his supermarket business had closed in 2011. The father of three said he had 49 employees at the time.

He also told O’Carroll he had a business idea and needed financing for it. “Right now I have everything I need except really the finance to get it off the ground,” he said. O’Carroll agreed to provide €30,000 to help with his business idea.

It later transpired Mr Molloy had a judgment against him from the Revenue Commissioners of €59,277. O’Carroll said yesterday after the debt was revealed, he believed he carried out “due diligence” on Mr Molloy by “looking straight into his eyes”. He said the man was under pressure, but had an idea that he thought might work and get him out of trouble. Hope was what would “get us out of this”, O’Carroll added. “I think he’s a good bet.”