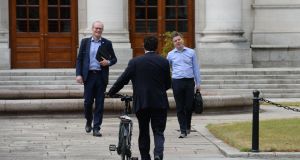 Extensive climate action measures to reduce Ireland’s greenhouse gas emissions, the end of direct provision and a massive programme of investment in walking and cycling infrastructure are among the policies included in a strongly Green-influenced programme for government drawn up between Fine Gael, Fianna Fáil and the Green Party over the weekend.

But the three party leaders remained locked in tense negotiations on Sunday night on the final details of the coalition deal, with differences remaining on tax cuts, the pension age and legislation banning the import of Israeli goods produced in the occupied Palestinian Territories.

A potential solution to the pensions issue mentioned by sources would be a deferral in the increase in eligibility age to 67 pending a report from a special commission.

It is believed Fine Gael was holding out for a commitment in the document to tax cuts in the future if resources allow.

Earlier, the negotiating teams signed off on a draft programme for government after almost six weeks of protracted and often difficult negotiations, leaving the final issues for the party leaders to resolve.

The document, which was widely leaked on Sunday night, is expected to be approved by the three parliamentary parties on Monday if the leaders can reach agreement, and will then be put to the members of the three parties for ratification.

There will be particular focus on the Green Party, in which there is expected to be significant opposition to the deal, and where a two-thirds majority is required if the party is to join the coalition. The position of deputy leader Catherine Martin, who was previously opposed to negotiations but led the Green Party team in the talks process, is expected to be pivotal in the party’s internal debates.

But several Green TDs were enthusiastic about the deal, pointing to a range of policy wins for the party in the document.

Crucially, the programme for government commits the next government to reducing Ireland’s emissions of greenhouse gases by an average of 7 per cent annually.

There will be a ban on the further exploration for gas in the waters off Ireland and a ban on the importation of fracked gas, which will halt the construction of the Shannon LNG project and other facilities.

The Direct Provision system will be abolished within the government’s term and replaced “with a new international protection accommodation policy centred on a not-for-profit approach”.

A number of referendums are also promised within the lifetime of the next government, including one on the right to housing.

Carbon tax will rise to €100 per tonne by 2030 rather than €80 per tonne as is planned now, with the resources being re-invested in increased social welfare payments and investment in climate change policies.

A new economic stimulus plan for the retail and tourism sectors is expected in July, with a wider national recovery plan following in October.

The document also commits that 50,000 social homes will be provided over the next five years, with an emphasis on new builds.