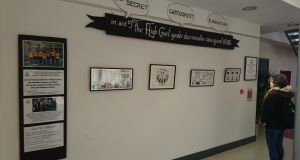 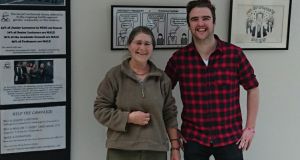 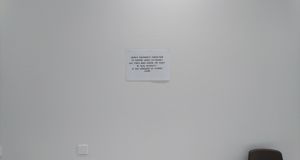 The spot in one of the arts buildings in NUI Galway where the Secret Cartoonist exhibition had been located. Last Friday at 1am, security staff at the college took it down. Photograph: Michelinesthreeconditions.wordpress.com

An exhibition of cartoons satirising gender inequality in colleges will go on display on Tuesday at NUI Galway after the university reversed its decision not to allow the display.

Last Friday at 1am, security staff at the college took down an exhibition that had just been hung in one of the arts buildings.

It had been organised by the Students’ Union in support of lecturer Dr Micheline Sheehy-Skeffington’s campaign for five female lecturers taking court cases against the college for failing to promote them.

The series of 14 cartoons by a secret cartoonist depicts a fictional university president and issues concerning gender equality.

A few students who had seen the exhibition tweeted what had happened with photos of the exhibition and the blank wall that remained after their removal.

The tweets were widely circulated and even appeared on a large screen above NUI Galway president Jim Browne as he addressed a high-profile conference for European universities on the campus on Saturday.

The college said on Friday that until it could establish details of the proposed exhibition, and consider any request for exhibition space, the materials could not be displayed “in accordance with university custom and practice”.

It said the university’s vice-president for student experience was reviewing the situation.

In a statement on Monday, the college said it could confirm “that custom and practices have now been complied with and permission has been granted for the exhibition”.

The cartoons were due to be moved from the Students’ Union boardroom to the Arts Millennium building on Monday evening.

Gender equality has been a headline issue at NUIG since a 2014 Equality Tribunal ruling found Dr Sheehy-Skeffington had been discriminated against in being passed over for promotion by the university.

The university was ordered to promote her to senior lecturer from July 2009, to pay her the salary difference in full, and to award her a tax-free €70,000.

Dr Sheehy-Skeffington announced she would use the award to help the five other women who were also shortlisted for promotion with her but who got no further in the process.

Members of staff have held protests against the alleged failings in the university’s gender equality policy in the intervening period.

The university has since set up a task force to look at the issue.

In addition, it recently appointed Prof Anne Scott to the newly created role of vice-president for equality and diversity.

“The cartoons are a fictional character portraying a university president. But the reason it’s been hung is to highlight the injustice against five women who, like me, were deemed eligible for promotion. The students don’t really understand or don’t know about it.

“There are five women with court cases and they probably won’t come up for another six or eight months more.

“It’s five women with full-time jobs here and it must be causing a lot of stress. I know it’s costing a lot of money because I have already paid out a lot of the €70,000 that I offered them.”