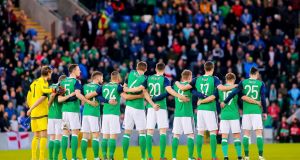 Northern Ireland’s football manager Michael O’Neill was on the substitutes’ bench in Windsor Park in November 1993: an anxious, unpleasant, if curiously exhilarating night of raw sectarian and sporting passions.

It was a bad time. Just weeks before, 10 people, including one of the bombers, were killed in the IRA Shankill bombing. A week later, eight were slaughtered in the UDA revenge attack in Greysteel, Co Derry.

The crucible atmosphere horrified English man and Republic manager Jack Charlton. “I never imagined the emotions and the feelings that were stirred up in the ground. It was nasty, it was unhealthy,” he said later.

This was more than a football game, one that even inspired playwright Marie Jones to write her hugely successful play, A Night In November, that addressed the themes of bigotry, hatred and reconciliation.

Alan McLoughlin scored for the Republic, a goal that sent the team to the US for World Cup 1994. The goal was greeted with silence by the home side’s supporters. “The safest place was on the pitch,” McLoughlin remembered later. “You didn’t dare look around and make eye contact. The venom in their eyes shocked me. I remember thinking, ‘This isn’t natural’.”

“Things have moved on,” says Michael O’Neill now, who prefers to remember Jimmy Quinn’s “fantastic volley” for Northern Ireland that night. “It was a great game of football with a very tense atmosphere. I don’t look at it in any other way, to be honest. Whatever people feel about it, and people may have different memories about it, but that’s my memory,” he says.

Today, things have changed: “The atmosphere is fantastic now and it is going to be fantastic going forward, a really positive atmosphere for the players to play in. We have left a lot of the past behind us.”

Fans from across Ireland will criss-cross France: Northern Ireland supporters heading to Nice, Lyons and Paris to play Poland, Ukraine and Germany; the Republic’s devotees to Paris, Bordeaux and Lille to play Sweden, Belgium and Italy.

In 1993 few people from a nationalist or Catholic background supported Northern Ireland, but that too is changing – even if more of them would still support the Republic first.

Most hope that both will do well. “At the end of the day it’s up to people to support who they feel their loyalty is to,” says O’Neill, who in his younger days played minor Gaelic football for Antrim.

“There are a lot of people who would be Catholics or nationalists who would be behind us and want to see us do well. Our team is very reflective of most sides of the community.”

Which it does: the squad includes players called Billy and Conor and Craig and Liam; players who come from Protestant-dominated Larne, or Catholic west Belfast.

Sitting in his brand new spacious office in Windsor Park, O’Neill looks out on to a construction site. Even unfinished, it is impressive. Capacity will be increased from 14,000 to 18,500.

The atmosphere during the friendly with Slovenia at the end of March was lively – a game the home side won 1-0. For the qualifiers, it was often electric.

O’Neill and the Irish Football Association’s head of sales and marketing Oonagh O’Reilly reckon some, particularly in the Republic, remember 1993 too well, and understand today too little.

Northern Ireland has come a long way from then: the improvements wrought by ceasefires, a flawed peace and imperfect powersharing are reflected on the pitch in the IFA’s Football for All project.

A farmer’s daughter from Aughlisnafin close to Dundrum in Co Down, O’Reilly took up the IFA marketing post over a year ago, following jobs in Ireland, North and South, and in the US.

O’Reilly won an GAA Ulster championship junior medal with Down. Club GAA football was played at home with Bryansford, but also in Dublin and with Fog City Harps in San Francisco when she worked in the US.

Every Friday, she plays five-a-side football with IFA colleagues. She tends to play with the veterans. “It’s good crack. We do well, for the first 20 minutes at any rate.”

Some of her colleagues watch bemusedly during warm-ups as she unselfconsciously solos the ball, as if she were back on a GAA pitch in Co Down practising before the throw-in.

Her workmates have also tried to coax her out of using the term “soccer”.

“It’s football,” they tell her. Mostly she says “football” in this interview, but she’s not too concerned about the semantic purists. “Soccer” slips in from time to time.

Recently, she organised tickets for a recent Northern Ireland international for her cousin Sinead, with whom she played Gaelic, and Sinead’s husband Kevin and “soccer mad” son Tadhg.

“Before the game Sinead asked for my mobile number. ‘Just in case,’ she said. ‘Just in case what?’ I said back,” O’Reilly replied with just a note of sharpness, she remembers.

“Later I got a text back from her saying her boys had the time of their lives, that Tadhg was a Northern Ireland supporter for now and ‘I even think my big GAA man may be changing’,” she tells The Irish Times.

Both O’Reilly and O’Neill are frustrated that they have to keep telling the world that football in Northern Ireland is not like November 1993 anymore: “The key message that we want to get out there is that it is football for all. “Forty per cent of our staff are Catholic. I don’t know how many Protestants are working in the GAA and I don’t know what the split is in rugby, but we are so diverse,” says O’Reilly.

Five out of six of the IFA’s directors are from a nationalist background, says O’Reilly, who acknowledges that “of course there is work to be done” in rooting out sectarianism “totally” from football.

Older people may hold dark memories of the Troubles that jaundice their view of the team and supporters, but the young are not so blighted. “The kids don’t care,” she says. And more companies are interested in marketing deals “because they can see the passion”, she says.

Reflecting the change that is taking place across Northern Ireland, O’Reilly sees herself not as Irish, or British, but “Northern Irish” – a term solely adopted by 21 per cent in the last census.

One of the Catholic players on the team, Liam Boyce, blesses himself in the dressingroom before games. Nobody bats an eyelid. He has come through the under-19 and under-21 squads to the senior team.

Boyce is from Divis on the Falls Road. “[My family] support me, so they support the team.” Neighbours and friends do, too: “They’re saying, ‘We hope you get picked, just keep scoring goals and look after yourself’.”

Now playing in the Scottish Premiership with Ross County, Boyce has scored 17 goals, won the Scottish League Cup for the first time and helped to keep the team safely mid-table.

Boyce rooms with fellow-forward Josh Magennis, a Kilmarnock player and a Protestant: “We get on like a house on fire,” says Boyce. “I have friends from secondary school who have always supported Northern Ireland. And I went to a Christian Brothers grammar school on the Glen Road! It’s just the way it is,” Boyce adds.

Sectarianism is not an issue: “I think it is more in the media – they focus on that. The team is mixed. We are all mates and we just want to play football and do well. We just try to take care of what happens on the pitch.”

Defender Conor McLaughlin is from the Glen Road in west Belfast and went to the same Christian Brothers’ grammar school. He plays for Fleetwood Town, a League One team in Lancashire

His excitement at the thought of playing in France is palpable: “The fans have been unbelievable to me. From the first time I’ve played here the atmosphere has been unbelievable. I love coming back to Windsor. The team spirit is unbelievable,” he goes on, adding that the team’s success has created a “feel good” factor: “I reckon we’ve helped that side of things.”

For Duncan Morrow, a politics professor at Queen’s University, the achievements of the IFA and the Northern Ireland supporters are one of the hidden, but “great and symbolic success stories” of the years of peace.

Football in November 1993 was sour and sectarian. Matters hit “rock bottom” in 2002 when the then Glasgow Celtic player, Neil Lennon from Lurgan, was forced to pull out of a Windsor international because of a loyalist death threat.

“There was a lot of sectarianism in the crowd, it was all red white and blue and sectarian chants,” says Morrow, who is running for the Alliance Party in the Assembly elections and used to lead Northern Ireland’s Community Relations Council.

Urged on by the Community Relations Council and others, key IFA people, such as Michael Boyd, then a young community relations officer with IFA, and Jim Rainey, then head of the Northern Ireland Supporters’ Club, acted.

Now the IFA’s director of football development, Boyd devised the Football for All project, which people such as Boyce and Rainey – and since then Gary McAllister, who is now head of the supporters’ club – fully embraced.

Sectarian songs were the first target. When some started singing them, the supporters’ club people just sang other songs louder – for instance, ‘We’re not Brazil, We’re Northern Ireland’.

“Then they created the Green and White Army. They persuaded people to wear green and white rather than red, white and blue. It was to refocus football away from politics on to sport. It became Brand Northern Ireland,” says Morrow.

Major wins, particularly the glorious 2005 defeat of England through a famous David Healy winner, ensured full houses and boisterous atmospheres, uniting orange and green. “A lot of Catholics still orientate towards the Republic but for them to support Northern Ireland or wish them well certainly no longer is the same barrier it once was,” Morrow goes on.

With just weeks to go to Euro 2016, the sense of expectation and excitement across Northern Ireland is growing, rather like the experience in the Republic in 1988, 1990 and 1994.

“We want to go and enjoy the finals but equally we want to go there and give a good account of ourselves. People have a team they can be proud of,” says Michael O’Neill.