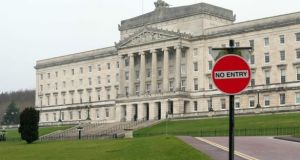 UUP leader Mike Nesbitt said it should not be assumed that the DUP and Sinn Féin will again emerge as the main parties in the North. Photograph: Charles McQuillan/Getty Images

Public anger over the “cash for ash” heating scheme could lead to unexpected results in the Northern Assembly elections which are expected to be called on Monday, the Ulster Unionist Party leader Mike Nesbitt has predicted.

As Northern Ireland appeared to be inexorably heading to the dissolution of Stormont and Assembly elections, Mr Nesbitt said it should not be assumed that the DUP and Sinn Féin will again emerge as the main parties in the North.

“We think this election should be a referendum on the handling of the renewable heat debacle, remembering it is just the latest scandal in a long list over the last 10 years in which the Sinn Féin/DUP coalition have ruled out of [Stormont] Castle,” Mr Nesbitt said Friday.

The Renewable Heating Incentive scheme could cost taxpayers £490 million (€561 million) and was the responsibility of Ms Foster when she was minister for the economy.

Mr Nesbitt pointed to how public anger had contributed to the Brexit result and to the election of Donald Trump. He argued that similar public disaffection with the main political parties could lead to shock results after the elections, which are expected to be called for early March.

“Those surprises come when people get angry and people in Northern Ireland are angry about the renewable heat debacle,” said Mr Nesbitt.

British and Irish government ministers remain available to assist if there is any possibility of movement this weekend that could avert elections. Northern Secretary James Brokenshire is remaining in the North should he be required.

The Assembly will sit on Monday with the expected early item of business the election of a first minister and deputy first minister. This likely will be a largely academic exercise as Sinn Féin has insisted it will not be nominating anybody to replace Martin McGuinness, who resigned on Monday.

The Assembly may, however, press ahead with a Sinn Féin motion of no confidence in the DUP speaker Robin Newton.

The Assembly also is expected to ratify special legislation proposed by DUP Minister for Communities Paul Givan on the so-called British “bedroom tax”. This tax reduces housing benefit to some social housing tenants who have spare bedroom capacity.

Under the November 2015 Fresh Start Agreement, Northern Ireland was to have mitigation from this tax. Otherwise, it was estimated that some welfare recipients could lose about £1,000 (€1,200) per year. The legislation will prevent the tax applying in the North.

The apparent inevitability of elections was reflected in the fact that this weekend Sinn Féin is holding selection conventions for the constituencies of west Belfast, east Belfast, south Belfast and south Down. All parties are preparing for an election which could be called for March 2nd.

Meanwhile, Mr McGuinness has condemned threats against Ms Foster. The former deputy first minister told the Impartial Reporter that she had disclosed online threats to the Police Service of Northern Ireland, including one where she was warned of beheading.

Mr McGuinness said such threats were “shameful and totally unacceptable”. “I unreservedly condemn those responsible for the cowards they are,” he tweeted.

Mr Brokenshire said they were “completely unacceptable and have no place in our democracy”.

On Friday, Sinn Féin Minister for Finance Minister Máirtín Ó Muilleoir was criticised by UUP MP Tom Elliott after he instructed legal counsel of his intention to challenge the 1737 Act. This legislation, said Mr Ó Muilleoir, required all court proceedings to be in English and made it a criminal offence to use any language other than English.

“Is this really where the Executive’s priorities lie right now?” asked Mr Elliott. “We have still to get any answers on the renewable heat incentive, which is costing us £85,000 a day. Hospital waiting lists are spiralling out of control. Yet the DUP and Sinn Féin’s biggest priority seems to be how many times they can poke each other in the eye.”