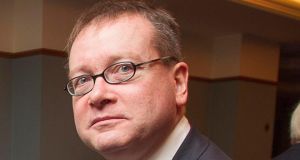 The North’s Attorney General John Larkin has questioned the British Supreme Court’s ruling upholding judgments against the Christian owners of a guesthouse who were ordered to pay damages for refusing to provide accommodation to a gay couple.

In November the Supreme Court upheld two judgments in which Hazelmary (69) and Peter Bull (74) were ordered to pay £3,600 in damages.

They had refused to let civil partners Steven Preddy and Martyn Hall stay in a double room at their guesthouse in Cornwall in 2008.

Mr and Mrs Bull said they regarded sex outside marriage as a “sin” and their decision was founded on a “religiously informed judgment of conscience”.

Mr Larkin queried this yesterday during a conference at Presbyterian Church headquarters in Belfast on The Church in the Public Square.

Mr Larkin focused on a paragraph in the judgment of Baroness Hale, deputy president of the Supreme Court.

Mr Larkin argued that Baroness Hale offered a “false equivalence” in that she did not appear to appreciate the nature of Christian objection. The “extent of the failure to understand the orthodox Christian position” was “striking”.

Christians who adhered to “traditional Christian law principles cannot without committing sin” enable his or her premises to be used to facilitate a purpose which that Christian believes to be sinful.

“To do so, the Christian believes, is to be complicit in the sin,” said Mr Larkin.