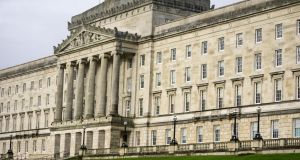 The Department for Communities announced the cut in an email circulated from the Líofa office to gaeltacht colleges on December 23rd. Photograph: iStockphoto/Getty Images

A decision by the head of the North’s Department for Communities (DfC) to withdraw funding for an Irish language bursary scheme designated for disadvantaged young people from both sides of the community has been criticised by political and language groups.

The Líofa scheme, which sent at least 100 people each year to attend summer Irish language classes in Donegal, was aimed at those who might not otherwise have had the chance to go to a Gaeltacht, and was open to people of all traditions and backgrounds.

The Department for Communities announced the £50,000 cut in an email circulated from the Líofa office to gaeltacht colleges on December 23rd.

“Because of efficiency savings, the department will not be providing the Líofa bursary scheme in 2017. Happy Christmas and Happy New Year,” the email read.

Dr Niall Comer, the president of Comhaltas Uladh, described the move as a “blatant act of discrimination.”

“Comhaltas Uladh of Conradh na Gaeilge considers this to be quite simply a deliberate and cynical attack on the Irish language, without any justification nor reason,” he told the BBC.

Deireadh le scéim scoláireachta #Líofa. But for a Gaeltacht scholarship, I wouldn't be who I am or where I am today. Awful.

#Liofa A festive "dog whistle" to cheer-up DUP backwoodsmen? Or twisting SF's nose to see if the party jumps ship? Deplorable either way.

“Our summer colleges are cross-community and disadvantaged children from both sides of the community have availed of this scholarship scheme.

“This decision will directly impact on hundreds of Irish language learners, from disadvantaged families across the north.”

Former Sinn Féin culture minister Carál Ní Chuilín who introduced the scheme in 2011 described it as a “disgraceful ending” and claimed it had “nothing to do with funds, just hatred of Irish”.

SDLP Mid-Ulster MLA and Irish language spokesperson Patsy McGlone said he would “press” DUP MLA and head of the Department for Communities Paul Givan to reverse what he described as an “unfair and retrograde step.”

“After watching the DUP set fire to £400million, or £600million according to the finance minister, this announcement will leave a sour taste for the Irish speaking community,” he said.

“Without wanting to sound cynical, one has to wonder if Minister Givan hasn’t taken this decision, at this particular time, to reintroduce tribal politics to a public currently focused on the DUP’s many financial scandals,” Mr McGlone said.

BBC Radio Ulster presenter Lynette Fay criticised the move in a tweet saying: “But for a Gaeltacht scholarship, I wouldn’t be who I am or where I am today. Awful.”

The Stormont administration has been criticised in the past over its promotion of Irish.

In 2014 the Council of Europe said growth and promotion of the Irish language was being blocked by hostile attitudes in Stormont and a lack of support for its use in the courts and in education despite a growth in demand for primary education in Irish.

In a review of minority languages the body said the government had not been able to justify banning the use of Irish in the courts or allowing people to take citizenship tests through the language.