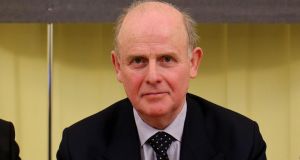 Sir Anthony Hart, chairman of the North’s Historical Institutional Abuse inquiry, said the inquiry would complete its work by July next year and submit its report in January 2017. Photograph: Paul Faith/PA Wire

The North’s Historical Institutional Abuse inquiry is to investigate a further six institutions, bringing the total number to 22, the inquiry chairman Sir Anthony Hart has announced.

The inquiry also wants victims of abuse to be properly compensated, he said.

Sir Anthony, a retired Belfast High Court judge, said despite the additional investigations that the inquiry would complete its work by July next year and submit its report in January 2017. Last year the Northern Executive gave the inquiry an extra year to complete its work.

In drawing up the list of six additional institutions, Sir Anthony said the inquiry had carefully considered information in respect of 54 homes and institutions in relation to which at least one person had made an allegation.

“We recognise that there may be a number of people who will be disappointed that we are not going to hold public hearings into every home or institution against which allegations have been made, but, as we have explained, we are satisfied that to extend the Inquiry for at least another two years at a cost of at least £8 million to the taxpayer would not be justified because it would not add to our understanding of the nature and extent of systemic abuse of children in homes and institutions,” he added.

The inquiry has been running since January last year and Wednesday is its 157th sitting.

The additional institutions to be included are: Manor House, a Church of Ireland children’s home near Lisburn, Co Antrim; Millisle Borstal in Co Down; St Joseph’s Catholic training school for girls at Middletown, Co Armagh; and three Good Shepherd Catholic convents in Derry, Belfast and Newry.

He added that the decision not to hold a public hearing in respect of a home or institution did not mean that the inquiry had decided that abuse did not occur in those locations.

He also clarified that it would not have any effect on any recommendations that may be made for compensation or other forms of redress.

At the inquiry in Banbridge, Co Down, Sir Anthony also said the inquiry will recommend that the Northern Executive pay compensation to those children who suffered abuse.

“Because our investigations are not complete we are not yet in a position to say what our findings of systemic failings will be, or what all our recommendations will be,” he said.

“However, what we can now say is that from the evidence we have heard so far we will recommend that there should be a scheme to award financial compensation to those children who suffered abuse in children’s homes and other institutions in Northern Ireland between 1922 and 1995,” he added.

He emphasised that the final decision on redress would be a matter for the Northern Executive. He said however that the inquiry would launch a “targeted consultation” to gather views on what the compensation should be.

“Any recommendations that we make for any form of redress, including compensation, will apply to any person who was abused within a children’s home or other institution within our terms of reference, whether or not that home or institution was investigated by the Inquiry.”

Sir Anthony said the inquiry had studied redress schemes for the victims of sexual and other forms of abuse in the Republic, Canada, Australia, Holland and Germany.