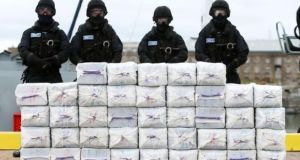 A ninth person has been jailed for his part in a plot to smuggle almost €300 million worth of cocaine into the United Kingdom only to be foiled by the Irish authorities when they intercepted a yacht off the west Cork coast.

Wayne Bush (45), formerly of Ormonde Avenue, north Hull, was jailed for six years for his part in the plot to smuggle about a tonne of cocaine into the UK aboard the yacht Makayabella which had sailed with the drugs across the Atlantic before it was intercepted by the Irish Naval Service.

The Makayabella was boarded by armed sailors from the LE Niamh about 250 miles off the southwest coast of Ireland on September 23rd, 2014. The Irish Naval Service detained the ship in a joint task force operation with the Customs & Excise and An Garda Síochána.

The operation to track the vessel as it crossed the Atlantic from the Caribbean involved the Irish authorities co-operating closely with both National Crime Agency and National Maritime Information Centre in the UK as well as French and Venezuelan law enforcement agencies.

On Tuesday at Leeds Crown Court, Bush pleaded guilty to conspiracy to import Class A drugs into the UK and was given a six-year term to add to a three-year sentence he is serving for an unrelated assault.

The court heard that Bush was part of a three-man “coopering crew” along with ringleader Stephen Powell and another gang member James Hill who were due to sail out from north Wales in a motor cruiser, Sea Breeze, to meet the Makayabella to bring back the narcotics.

They failed in the first attempt to rendezvous with the Makayabella when the Sea Breeze ran out of fuel. They then tried to buy another vessel at a marina in Milford Haven, south Wales, when they learned that the Makayabella had been boarded by the Irish Naval Service.

The three-man gang then aborted their plan and dumped the car they were travelling in at Cardiff Airport before fleeing. But police located the vehicle which contained six drums of diesel for the planned sea trip while they also found a slipi in the car with Powell and Bush’s fingerprints on it.

Bush has now become the ninth person to be jailed by either the Irish or British authorities for participation in the attempt to smuggle the huge drugs consignment into the UK through north Wales. Three of the gang are serving sentences in Ireland with the remainder in the UK.

In April 2015, three Britons detained on board the Makayabella pleaded guilty at Cork Circuit Criminal Court and were jailed for varying terms for possessing 1,025kgs of cocaine with a street value of €290 million for sale or supply and for attempting to import the drug into the UK.

Skipper of the Makayabella, Jonathan Powell (71) from Silsden, west Yorkshire was given a 10-year term by Judge Seán Ó Donnabháin and crew members Benjamin Mellor (34) from Bradford and Thomas Britteon (28) from Grimsby were each jailed for eight years.

Earlier in December 2014, Powell’s son Stephen Powell (48) of Netherfield Road in Guiseley, west Yorkshire, was jailed for 16 years by Judge Peter Collier at Leeds Crown Court for his part in the plot to smuggle the cargo of cocaine into north Wales.

Stephen Powell was the brains behind the operation and had recruited his father to purchase the yacht which was to bring the drugs across the Atlantic before transferring them to a motor cruiser, the Sea Breeze off the North Wales coast, the court heard.

In September 2015, two other gang members – David Webster (44) from Otley, west Yorkshire and Philip McElhone (29) from Halton Moor, Leeds, were jailed for 11 years while another, James Hill (31) from Ilkley, West Yorkshire, was jailed for six years for conspiracy to import cocaine.

An eighth member of the gang, Stephen Powell’s wife, Dawne (56) from Guisely in west Yorkshire, was acquitted of conspiracy to import cocaine. But she was found guilty of money laundering and jailed for three years, also at Leeds Crown Court in September 2015.

1 Sweden should have done more to combat coronavirus, health chief says
2 With Lincoln looking on, the crowd dropped to their knees as 7pm approached
3 Luke ‘Ming’ Flanagan bares his bottom half to European Parliament
4 Coronavirus: 25% of new cases arising in the community with no known link to other cases
5 Trudeau lost for words when asked about clearing of protesters for Trump photo
Real news has value SUBSCRIBE