State’s most notorious miscarriage of justice case has yet to be explained, 40 years on 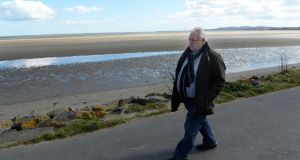 Nicky Kelly, who was arrested in connection with the Sallins train robbery. a crime he had no part in. Photograph: Eric Luke/The Irish Times

The celebrated civil rights lawyer Paul O’Dwyer had done everything he could to persuade a desperately homesick Nicky Kelly, who had been sentenced to 12 years in jail for the Sallins train robbery, to stay in New York.

Mayo-born O’Dwyer had ensured Kelly received treatment at the neurological unit of Bellevue hospital, made necessary, he claims, by beatings to the head he received in 1976 while in Garda custody at the Bridewell in Dublin.

However, Kelly could not be persuaded to stay. He returned.

The two men did not meet again for 16 years until a night in March 1996 when O’Dwyer was pushed in a wheelchair by then US president Bill Clinton into a reception at New York’s Plaza Hotel.

Kelly was in high company that night, attending the dinner where the Irish American of the Year award was conferred on Clinton, at the invitation of the powerful Kennedy family – a mark of favour in Irish circles in the United States.

Seeing Kelly, O’Dwyer gripped his hand, remembering the warning that he had given him that he would be jailed by Ireland’s political and legal establishment if he went back: “What did I tell you? They are treacherous people.”

Today marks the 40th anniversary of Kelly’s arrest in his native Arklow for a crime that he had had no hand, act, or part in – an event that has cast a long shadow in the four decades since, dominating his life and health.

It also marks the beginning of one of the most notorious miscarriage of justice cases in the history of the State and one that has never been explained nor inquired into.

The IRA would later claim responsibility for the robbery, on two occasions.

However, Kelly and four other members of the then Irish Republican Socialist Party were arrested. All except one were charged.

Three of them – Kelly, Osgur Breathnach and Brian McNally – were convicted by the Special Criminal Court.

The three judges had accepted as evidence confessions which the men insisted had been beaten out of them by gardaí. Shortly beforehand, anticipating the decision, Kelly went on the run in Ireland, the Netherlands, France, Canada, and the US.

He was sentenced to 12 years’ penal servitude in his absence. Breathnach received the same.

Brian McNally was sentenced to nine years’ penal servitude. In May 1980, Breathnach and McNally won their appeals and were released from Portlaoise Prison.

It was while at Bellevue hospital in 1980 that Kelly first heard the IRA had claimed responsibility for the Sallins robbery.

When he did, it was an added incentive for him to leave his hospital bed to return to Ireland.

O’Dwyer expressed as much concern as he could. So, too, did his solicitor, Pat McCartan, later a Democratic Left TD and now a Circuit Court judge.

However, Kelly went home. Their concern was well placed.

On arrival at Shannon Airport, Kelly was immediately detained.

He was taken to Portlaoise Prison and would spend the following four years in jail as appeal after appeal failed.

Eventually Kelly almost died on a hunger strike that he maintained for 37 days.

There was treachery in how that ended too.

In a successful effort to get Kelly to take food, he was told that he had not used one ground of appeal – one that would work, if he tried.

Later, when he did, it was blocked.

Kelly was not short of supporters who became significant figures in Irish public life in the decades afterwards, including three future presidents of Ireland: Mary Robinson, Mary McAleese and Michael D Higgins.

Eventually Kelly was released in 1984 by then minister for justice Michael Noonan, on “humanitarian grounds”.

He continued his fight for justice with the help of solicitor Greg O‘Neill. In 1992, on instructions of the then government, Kelly was pardoned by Mary Robinson “as if he had not been charged or convicted” in connection with the Sallins robbery.

Subsequently he received a large six-figure sum in compensation from the State.

No attempt has ever been made to explain how this extraordinary sequence of events came about.

A member of the gang involved was interviewed by this reporter for the 2006 book While Justice Slept.

Explaining how they did it, he said none of them was ever questioned, though he believes gardaí knew they were responsible.

These days Kelly (65) lives in Dublin, for health reasons. He has been attending both Beaumont and St Vincent’s hospitals for cardiac and neurological treatments, so it made sense to move rather than commute from Arklow.

He has had a heart attack and has severe ongoing headaches which have led to “a couple of blackouts”.

On his release from prison in 1984 a specialist told him the effect of his hunger strike was that “over a period of time it would come back”.

“Hunger strikes attack the oesophagus, inner stomach and liver. I listened to him but was more interested in getting on with life”.

It has meant that “on and off, particularly for the last four or five years, I‘ve been in and out of hospitals”.

He agrees he got a lot of money from the State in compensation, some of which was spent “foolishly”, some of it lost in projects which did not work out – businesses and building in Wicklow and elsewhere in the country.

A lesson he learned is that “you should never do something that you know nothing about”.

But he says his situation is nothing “when you look at so many other people, ordinary people, who now find themselves homeless or facing the threat of being evicted when they were just trying to pay a mortgage for their household”.

His circumstances are fine. He has a lot of friends and there is ongoing talk of making a film about his story.

There was a problem with drink “at times” but that has been behind him now for a long spell.

“I can‘t drink even if I could. The last drink I had was over 10 months ago. If I‘m over here [hospital] giving blood tests, well, they just won‘t entertain you.”

And he has become involved in voluntary projects, some with NGOs, “but until I get my health any way right and find a resolution to that I don‘t want to be a hindrance”.

He feels no bitterness looking back. Where the gardaí involved are concerned, he has since “met plenty of them”.

“In the end of the day the squad that was there was set up . . . They were carrying out instructions.”

But there was one extraordinary meeting with Mr Justice Liam Hamilton, presiding judge at his trial, with Circuit Court judge Gerard Clarke and president of the District Court Cathal Ó Floinn.

Hamilton had pronounced the 12-year penal servitude sentence on Kelly.

But there are times when he gets annoyed. Such as “when I was lying in a hospital bed listening to the debate about the Special Criminal Court during the general election campaign”.

He and other innocent people were “living proof” it should be abolished.

He gets angry at some of those who defend it, “hypocrites”.

“I would have met many of these people, and indeed I have had correspondence with them, saying how horrible and how totally unconstitutional the Special Criminal Court is and that it should be done away with, the whole lot, but just because it becomes an issue at election time they can‘t shout loud enough to espouse it, to defend it.

“Of course it should be gone but it’s not just what I believe. I‘m living proof, as are other innocent people who suffered from it as well,” he said.

He was a councillor in Arklow from 1991 to 2016, and a member of the Labour Party since 2001, losing as its candidate in the 2002 general election by just 19 votes to Independent Mildred Fox.

In 2011 he left Labour and stood unsuccessfully as an Independent in the general election that year. In 2015 he lost his council seat.

His experience at local level has led him to conclude: “We talk about reforming national democracy, or the Dáil, but in local democracy greater powers will have to be taken away from management and given to the elected representatives.”

He gets exercised “looking at ordinary decent people on the street or in temporary accommodation, not just individuals but families, and to realise that monies that should have been spent on those houses was spent instead, sacrificed to the bondholders, so our leaders could look good in Mrs Merkel’s eyes”.

Our political leaders “were willing to sacrifice a generation of our people,” he said.

“Think about it, with our unemployed, our homeless our health situation, the whole lot, then you think of 1916.

“Although they were different in many ways, Connolly, Pearse, Mac Diarmada, Éamonn Ceannt, they all would recoil in their graves if they saw this as their legacy 100 years on, and no fanfare will cover up that.

“Hopefully I will live long enough to see a change.”

No agreement reached to reopen special needs schools – Fórsa 08:54
Mary’s story: Roscommon woman believed a lifetime of exile was as it should be 06:00
Covid-19: Nursing homes to be prioritised for vaccination for 10 days amid supply shortage 01:00
Plan for second set of Leaving Cert exams for Covid-affected students under consideration 01:00
President leads tributes to HIV/Aids campaigner Fr Michael Kelly 22:52