Nicky Byrne looks ahead to Eurovision, where he feels his song 'Sunlight' gives Ireland 'the best shot' of success. Video: Ronan McGreevy 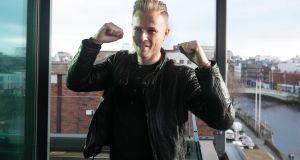 Westlife are no more, but Nicky Byrne is hopeful the irritatingly catchy ‘Sunlight’ will bring Eurovision success to Ireland and spark a solo career for him. Photograph: Gareth Chaney/Collins.

For Nicky Byrne, the launch of his Eurovision song was like the good old days of Westlife when huge media interest followed the band’s progress.

Holding court in the Morrison Hotel, Byrne reminisced about the band launching its second album Coast to Coast in the same venue 16 years ago.

Westlife are no more, but Byrne is hopeful the irritatingly catchy Sunlight will bring Eurovision success to Ireland and spark a solo career for him.

“Qualifying would be our aim. It’s a time in Eurovision history for Ireland when we needed a change. I wouldn’t go near this if I didn’t believe in the song,” he said.

Ireland has had a dismal run in recent Eurovision competitions - coming last in 2013 and failing to reach the final in the last two years - and expectations are low.

In previous years the decision not to hold a national contest to choose the Irish Eurovision entry might have created some controversy, but not anymore given the results of recent years.

“We have a catchy, well-written, radio-friendly pop song,” Byrne said. It is mixed by Serban Ghenea, who worked on Taylor Swift’s Blank Space and the smash hit Uptown Funk, and Tom Coyne who mastered Adele’s latest album 25.

Byrne has co-written Sunlight with Wayne Hector and the composer Ronan Hardiman. Hector wrote seven Westlife number one singles, including Flying Without Wings, Swear It Again and World Of Our Own. He has an array of hits with other artists, including One Direction, All Saints, JLS, Olly Murs and Nicki Minaj. Hardiman is best known for his work on Michael Flatley’s Lord of the Dance and Feet of Flames.

“We have put the package in place to give it our best shot,” he said. “Take me out if it and it doesn’t get better than the producers and mixers and masters that are there. These are the people who are writing the best songs in the world.”

Byrne said Sweden was Westlife’s third biggest market after Britain and Ireland and it was a case of “all the stars aligning” when Sweden won last year. The 2016 contest will be staged in Stockholm where Westlife have previously played.

“There are no guarantees, but we have prepped it as best we can,” he said.