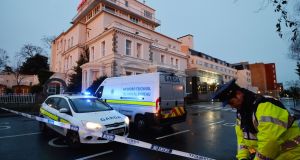 Gardaí at the scene of the shooting at the Regency Hotel in Dublin last year. Photograph: Alan Betson

The Dublin hotel where David Byrne (33) was shot dead last year has received a net insurance pay-out of €150,000 as a result of the gangland shooting and its impact on the hotel business.

The insurance payout to the Regency Hotel is confirmed in new accounts for the hotel, which show that an additional €350,000 was paid out in legal fees as part of a settlement last October.

The payout was made on October 6th and in a sworn statement before the High Court last year, James McGettigan, director of Regency hotel firm, Regan Development Ltd, said the hotel had suffered immense reputational damage and loss of business in the weeks which followed the shooting.

Yesterday Mr McGettigan said the Regency business has bounced back and trade is back to similar levels to 2015.

Mr McGettigan said: “The first half of 2016 was a difficult period for the hotel, however the second half saw a significant recovery in our business.

The company is making fresh investment into the business and Mr McGettigan said a “substantial renovation” will begin in a few weeks.

New accounts filed by Regan Developments Ltd with the Companies Office do not mention the shooting, which sparked off a murderous spiral of violence in the Kinahan-Hutch gang feud, but refer to it only as “an unfortunate incident” in a note explaining the insurance payout.

The company recorded a pre-tax loss of €1.82 million in the 12 months to the end of July last. This was as a result of an exceptional cost of €3 million that is not explained in the accounts.

The company’s gross profit, including the operation of a supermarket, increased by 11 per cent - from €4.8 million to €5.3 million.

Earlier this year, the Regency firm emerged from examinership. The examinership process was initiated due to other debts which the hotel was used as collateral for and was not due to the performance of the hotel.

Shareholder funds at Regan Development Ltd at the end of last July totalled €1.3 million. The firm’s cash pile during the year decreased sharply from €2.7 million to €253,769.