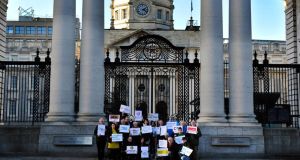 A coalition of social justice groups has called for basic rights to housing, health care and education to be enshrined in the Constitution.

The groups said that 25 years after the Government ratified the UN International Covenant on Economic, Social and Cultural Rights, no steps had been taken to incorporate the covenant’s measures into Irish law.

Speaking at a protest outside Government Buildings, Amnesty International director Colm O’Gorman said enshrining these rights in law would put them “at the centre of decision-making”.

Arguments that the Government could not afford to enshrine these rights represented a fundamental misunderstanding of the process, he added. “The Government acknowledges people’s rights yet the simple reality is that there is no proper legal protection for those rights.”

The covenant was about using resources properly regardless of how much money was available. “In fact when there is less money the process becomes all the more important ... It is about effective use of resources, ” he said.

Mr O’Gorman also referred to the Constitutional Convention, which reported earlier this year and which he said had voted overwhelmingly in favour of the Government taking action to incorporate the measures of the UN Covenant in Irish law.

The event took place just days after the death of homeless man Jonathan Corrie in a doorway within yards of Leinster House.

The funeral of Mr Corrie took place on Saturday. His remains were cremated following a short service which was presided over by Dean of Kilkenny, the Very Rev Katherine Poulton, at the Newlands Cross Cemetery and Crematorium.

Mr Corrie’s family did not want the media to attend.

Asked about weekend media commentary about a “homeless industry” in Ireland, campaigner Fr Peter McVerry said his initial reaction was he “wouldn’t dignify the reports with a comment”. But on reflection he said there was “a military industry, an oil industry, a tobacco industry” and he wondered “would they not make a better target”.

Cecilia Forrestal of Community Action Network said she supported the call for the transposition of measures in the covenant into Irish law. She said very high proportions of people said the rights of people to housing and health care, among other issues, should be supported by measures which give people access to the courts, to enforce their rights.

Martin Collins of Pavee Point said protection of economic, social and cultural rights was a right in itself. Mr Collins said that since Ireland had ratified the covenant the UN committee responsible for its implementation had written to the Irish Government on a number of occasions, asking that its measures be implemented. Among the groups represented at the protest were Age Action, Amnesty International, the Children’s Rights Alliance, FLAC, Irish National Organisation for the Unemployed, Pavee Point and the Peter McVerry Trust.