Memorial to the 1,192 dead is near the site of John Redmond’s Woodenbridge speech

On September 20th, 1914 the Irish Parliamentary Party leader John Redmond made a speech at Woodenbridge, Co Wicklow. It was recreated at the Parnell Summer School. Video: Ronan McGreevy 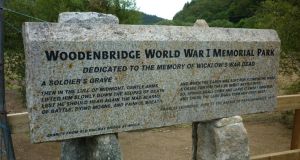 The Woodenbridge World War One Memorial Garden in Co Wicklow which formally opens today. The memorial commemorates the 1,200 approx men from all areas of County Wicklow who died in the First World War. Photograph: Jack McManus 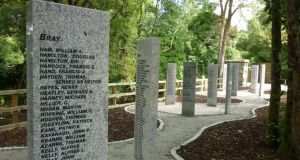 The Woodenbridge World War One Memorial Garden in Co Wicklow which opens today. The memorial commemorates the 1,200 approx men from all areas of County Wicklow who died in the First World War. Photograph: Jack McManus

The first World War dead of Wicklow will be remembered today with the opening of a memorial park in the beautiful surroundings of Woodenbridge.

The date and the timing are particularly significant. It is 100 years to the day since the third Home Rule Bill was given royal assent, the culmination of Irish Parliamentary Party leader John Redmond’s life work as a constitutional nationalist.

Two days later, Redmond made a famous speech urging Irishmen to go “wherever the firing line extends in defence of right, of freedom and religion in this war”. The speech was made at Woodenbridge where a party of Irish Volunteers had been drilling.

Under a tree that remains there to this day, Redmond told the assembled volunteers that he had no intention of making a speech and promptly then made the most fateful one of his political life, pledging them to aid the British war effort.

This evening, Minister for Foreign Affairs Charlie Flanagan will open the Wicklow War Memorial to the 1,192 men from the county who lost their lives in the first World War.

Among those listed on the memorial are Redmond’s brother, Willie Redmond MP, who was killed at the Battle of Messines Ridge in Belgium in November 1917 and who, at 56, was one of the oldest men to die in battle.

The monument, which is located in beautiful surroundings on the bank of the river Aughrim at Woodenbridge, is the culmination of over three years of planning and preparation and cost €85,000.

The names listed on the memorial are the results of 20 years of research by local historian Brendan Flynn and new ones will be added as names come to light.

Independent TD Billy Timmins, who is involved in the project, said their goal was not to judge the actions of Redmond in encouraging Irishmen to fight in the war nor those who responded to their call.

Mr Timmins said it had been forgotten that Redmond’s speech was well received and the vast majority of Irish Volunteers agreed with him, including all the volunteers in Wicklow.

“None of them intended dying. History will be very kind to John Redmond, ” he added. “The Irish Parliamentary Party and Redmond had no political descendents. They were written out of history. It is only slowly dawning the positive things he did do.”