New seasonal job permit to be introduced for short-stay workers 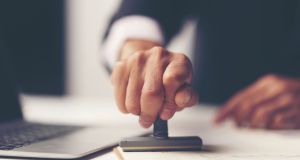 The new permit would cater for short-stay workers in areas such as horticulture, the Oireachtas Joint Committee on Enterprise, Trade and Employment was told. File photograph: iStock

The Government is to introduce a new seasonal employment permit to cater for short-stay workers in areas such as horticulture as part of new legislation, an Oireachtas committee has been told.

The Department of Enterprise, Trade and Employment said the proposed legislation followed on from a review of economic migration policy carried out in 2018 which “indicated that the employment permits system, while robust, lacked flexibility and was in need of some updating, in order to make it more effective and responsive to changing labour market needs”.

Principal officer at the department Fiona Ward told the Oireachtas Joint Committee on Enterprise, Trade and Employment on Tuesday that the legislation aimed to increase the agility and effectiveness of the existing system and did not represent a change in overall Government policy.

Ms Ward said Ireland was an outlier both in the European Union and among many developed nations outside of the EU in not having provision for granting seasonal employment permits.

“There is evidence that some employers are disadvantaged vis-a-vis competitors in other jurisdictions in not having this form of permission. Therefore, it is proposed to design a short-term employment permit to cater for short-stay and recurrent employment situations in sectors, such as horticulture, where this type of employment is common.”

She said there would also be a restructuring of the labour market needs test before these are sought. The needs test involves employers demonstrating that they made a genuine effort to recruit from within the State and across the European Economic Area (EEA).

Ms Ward said at present employers were obliged, under primary legislation, to advertise, for example, in national newspapers for a number of days.

“The proposed Bill, while continuing to require an employer to carry out a labour market needs test before seeking to recruit from outside the EEA, will remove the detail of how this must be done, allowing for the setting out in regulations of the requirements needed to demonstrate real engagement with the jobs market in Ireland and across the EEA.

“Specifically, the intention is to remove the operational requirements from primary legislation, instead allowing the media for advertising of vacancies to be prescribed in regulations and varied where necessary. For example, some types of vacancies may be best advertised through social media, others in sector-specific journals or by a radio campaign.”

Louise O’Reilly TD of Sinn Féin and Rise TD Paul Murphy expressed concern at the committee about the planned shift from a legislative-based system to one based on regulations.

The new legislation would also see the introduction of a scheme to deal with “occasional exceptional circumstances where an employment permit may be granted despite not meeting all of the criteria for the general employment permit”.