New chair for mediation between Croke Park and locals 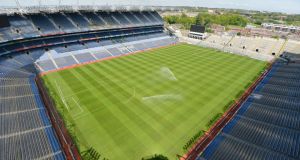 None of the events took place as the singer cancelled all performances after Dublin City Council gave permission for only three nights.

“There has been a series of agreements in the past that haven’t been implemented or have been broken by Croke Park,” Mr Stephens said.

“They haven’t done what they committed to do. For example, one of them is that there’d be no more than three concerts every year, and last year, of course, they attempted to break that.

“We have an agreement with them that they would not use Croke Park two days in a row unless under very special circumstances - it would be only for replays and things - and we have just received a schedule of matches for the year and there are a number of weekends already where they are planning for matches two days in a row.”

Residents’ association chairman Pat Gates said it was “a very positive step” that Ms Blackwell had agreed “to help us iron out our differences”.

“She is clearly independent of all the parties involved and will bring a fresh view to the issues that have arisen over the years and which remain unresolved,” Mr Gates added.

Unions warn of move away from negotiations if no pay deal by Christmas 01:45
Hundreds of health staff unavailable every week due to coronavirus 01:26
Cannabis plan for State-owned bogs goes up in smoke 01:23
Europe needs ‘serious acceleration’ in fight against Covid-19, warns WHO 01:16
Concerns over cost halt €20m north Dublin city cycle path 01:14

1 Three relatives dead after apparent murder-suicide in Kanturk, Co Cork
2 Gardaí say 52 people who went missing in 2020 not yet found
3 Woman stranded in Ireland due to pandemic has ‘miracle baby’
4 Appeal for missing woman: 'She is my only sister... it’s still torture'
5 Two hundred Irish retailers for all your online Christmas shopping
Real news has value SUBSCRIBE